An Air Niugini Boeing 737-800 attempting to land at Chuuk International airport in Micronesia has landed short of the runway in an adjacent lagoon.

Local media reports indicate the aircraft was landing around 10:10 local time on 28 September while operating a flight from Pohnpei, which was scheduled to continue on to Port Moresby.

Pictures on social media show the bottom half of the 737’s fuselage submerged and slide rafts deployed from most of the doors. The airline says that all 35 passengers and 12 crew members were able to evacuate, and were rescued by nearby vessels. 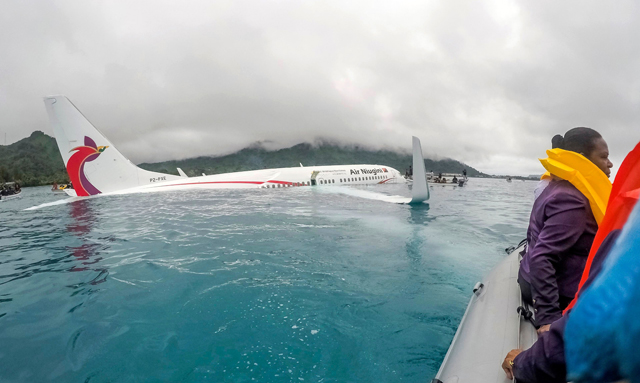 Air Niugini adds that there are reports that there was heavy rain and reduced visibility at the time of the accident.

The Micronesia Division of Civil Aviation shows that Chuuk International has a single 1,831m long runway that runs parallel to fringe reefs on the northwestern side of Weno Island.

Flight Fleets Analyzer indicates that P2-PXE was built in 2005 and is leased from Avolon.