Preliminary investigation into the serious in-flight upset to an S7 Airlines Airbus A321neo has found that the aircraft suffered disruption to three air data systems shortly after take-off from Magadan, leading to discrepancies in airspeed information and consequent control problems.

The aircraft – bound for Novosibirsk on 2 December – was transporting 202 passengers and seven crew members.

Freezing conditions, including heavy snow and a temperature of minus 9°C, were present at Magadan during the departure, and federal air transport authority Rosaviatsia states that de-icing treatment was carried out on the twinjet before take-off.

Although the crew initially opted to return to the airport, the A321neo stalled during its descent and approach to landing, and the crew chose instead to divert to Irkutsk – a 4h flight away – where it landed safely.

Inspection of the aircraft found rough ice on the leading edges of the wing and ice ridges were also present on the forward fuselage, in front of the pitot-static ports, as well as the radome. 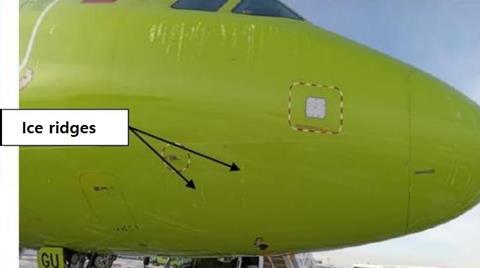 Formation of the ice ridges on the fuselage “distorts” airflow to the pitot-static system and its pressure sensors, leading to unreliable airspeed indications, says Rosaviatsia.

The authority has yet to detail fully the circumstances of the incident involving the aircraft (VQ-BGU), but a flight-data recording document emerged online shortly after the event which appears to show the jet experienced excessive pitch and roll shortly after departure.

Although its authenticity has not been officially verified, the basic data is consistent with the aircraft’s trajectory following take-off from Magadan.

It suggests the aircraft initially climbed to about 8,700ft but underwent a degradation of its flight-control laws. The flight-data recording appears to show rapid fluctuations in altitude, from around 5,000ft to 14,000ft, bank angles alternating from about 40-50° to as much as 91°, and variations in pitch from 24° nose-down to 43° nose-up.

Rosaviatsia is highlighting, in a safety bulletin, the need to monitor compliance with de-icing processes to ensure aircraft are clean, listing a number of previous incidents and accident attributed to ice build-up. 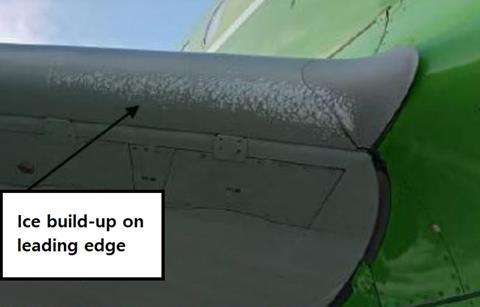 While it has not detailed conclusions over the cause of the incident, the bulletin stresses that ground-handling personnel must pay attention to validity periods for de-icing fluid protection, ensure that fluid application is carried out in strict accordance with manufacturers’ flow data, that different fluids are not mixed unless approved, and de-icing vehicles are correctly maintained.

Rosaviatsia is also recommending that crews and ground-handlers of A320-family aircraft familiarise themselves with information from the manufacturer on preventing ice formation on the forward fuselage.

Airbus has previously stated that ice ridges can form ahead of the pitot-static system if the aircraft has been parked for a long stay in cold conditions – most accretion occurs before the first flight of the day – or can emerge as melting snow from heated windshields re-freezes as it runs down the fuselage.

Ice ridges ahead of the pitot probes can cause perturbation of the airflow, it adds, and lead the air-data system to indicate speeds lower than the actual airspeed.