Yakutsk airport’s runway 23L had been undergoing construction work, shortening it by 1,150m and limiting its length to 2,248m. There was a 180m buffer between the far end of the runway and the construction zone.

After it touched down at 132kt, about 360m from the threshold, the spoilers deployed and reverse-thrust was engaged.

But as the twinjet decelerated to 88kt, and the pilots stowed the reversers and applied manual braking, the cockpit-voice recorder captured an expletive-laden attempt to slow the aircraft further.

“No brakes,” the captain remarked. The crew re-applied reverse-thrust at 80kt, some 1,450m along the runway, and then – at 68kt – resorted to engaging the parking brake, before activating reverse-thrust for a third time at 30kt.

With the aircraft subjected to maximum reverse, and full braking, including the parking brake, it started to enter a leftwards skid and crossed over a temporary end of the runway, stopping about 70m before the section undergoing construction.

Despite the overrun the crew chose not to report the incident, and started to taxi back along the runway. But they continued to experience substantial difficulty with braking control and, given the “impossibility” of taxiing, decided to call for a tractor to tow the jet. Subsequent inspection found significant wear on the tyres.

Less than 2h after the incident, another Yakutia Superjet (RA-89011) started conducting an approach to the same runway after arriving from Ulan-Ude.

Yakutsk air traffic control and the airport’s automated weather transmission gave the friction co-efficient as 0.45, and reported a 6kt tailwind. The crew, having listened to the meteorological information, discussed the approach and – among other matters – the used of ‘medium’ autobraking.

The aircraft’s right-hand thrust-reverser had been de-activated before the flight, but the friction and tailwind given to the pilots were still within landing limits.

“Hence the decision of the crew to perform the approach and landing was justified,” says the inquiry.

But it states that the crew had been given “false information”, because the actual friction co-efficient was less than 0.3, a level which should have prohibited the landing. 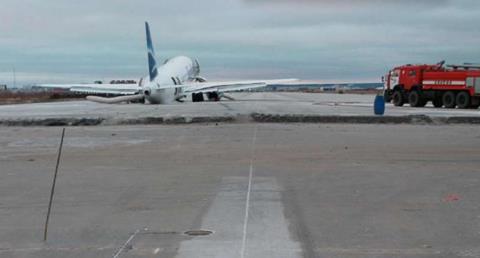 The captain was flying the aircraft. Investigators indicate the approach was normal – with the jet’s landing weight at 40.3t, a descent rate of 780-840ft/min and an airspeed of 150kt – although it was slightly low on the glidepath.

The captain selected reverse-thrust on the left-hand engine and the autobrake activated with about 1,570m of runway remaining.

“At the initial stage of the [landing roll] all braking systems of the aircraft…functioned normally,” says the inquiry.

The captain started easing reverse-thrust at about 100kt, which the inquiry considers to have been premature under the conditions – even given the runway data accepted by the crew.

Cockpit-voice recorder information shows the captain then remarked that the aircraft was not decelerating, and started applying manual braking, before selecting maximum reverse-thrust on the left engine again.

Less than 450m from the end of the runway, the first officer exclaimed about the ineffective braking. The parking brake was not engaged.

The Superjet overran the runway at 47kt, slightly to the left of the centreline, continuing over the 180m buffer before encountering a sudden 0.4m-high protrusion marking the beginning of the construction area.

Its nose-gear struck this protrusion and the main landing-gear followed, hitting the raised section at 21kt with an impact of 4.39g. The main gear collapsed and the aircraft slid on its fuselage underside and engine nacelles for about 60m before coming to a halt.

Although the engine fire warnings activated, the inquiry says there was no fire anywhere on the aircraft. 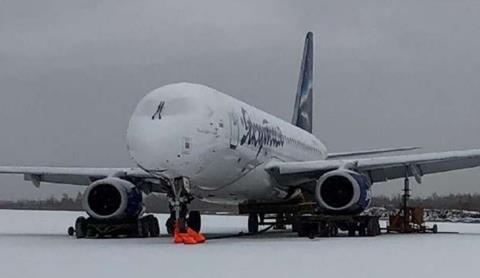 Only minor injuries were suffered by a small number of the 87 passengers on board the jet, and none of the five crew members was injured. The aircraft, however, was extensively damaged.

Investigators state that, while the misleading friction data was the primary cause of the accident, it was exacerbated by the absence of a ramp or slope to connect the runway in use to the section under construction. The inquiry adds that Yakutsk airport’s control of runway icing risks was insufficient.

Analysis by the investigation team shows that a Superjet touching down at maximum landing weight on a dry runway needs a distance of 1,598m. This increases by 15% to 1,838m on a wet runway, and to 3,650m if the co-efficient of friction is 0.3.