The union representing US flight attendants has called on Congress to extend government financial assistance for airlines through the end of the year.

The payroll support program, part of the CARES Act passed by Congress in March, designed to help airlines manage through the coronavirus crisis, runs out on 30 September. In return for $25 billion in government support, airlines agreed to maintain a network of skeleton service and pledged no involuntary layoffs or furloughs until that date.

But the Association of Flight Attendants says this is not enough time for the airlines to get back on stable financial footing following the pandemic. The union has asked for Congress to extend the programme through the end of 2020 in order to avoid mass layoffs at the end of September if passenger demand does not return. 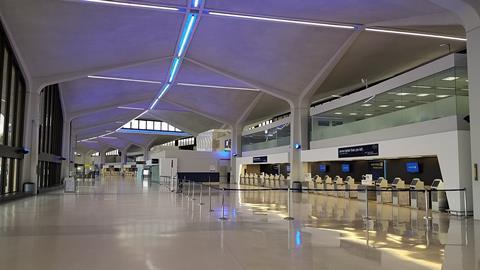 “The programme is set to expire on September 30th and the time to prepare for October 1 is now,” Susannah Carr, a United Airlines flight attendant and union representative, tells a hearing of the US House of Representatives’ Committee on Transportation and Infrastructure on 9 June.

“When CARES was written it was expected the industry would be closer to full recovery by the fall. It is clear now, that will not happen. At a minimum, Congress should extend the program through the New Year,” Carr says.

Major US airlines are still running significantly reduced operations, though many have said they have seen a small uptick in bookings as lockdowns and shelter-in-place orders across the country are being eased. But United has told employees that it will likely only need about 15% of its flight attendant workforce for the month of June. It is unclear when and how travel demand will return, making it almost impossible for airlines to plan beyond a few weeks out. United received about $5 billion of government payroll aid.

Safey issues and protection from the virus remain important issues in travelers’ decision-making process of whether they will return to the air and if so, when. The flight attendants’ union also says airlines are not doing enough to inspire passengers’ confidence to return to air travel.

Calling the coronavirus pandemic “the biggest crisis aviation has ever faced” Carr says that “a hodge-podge of individual voluntarily-adopted measures” by airlines have put workers and passengers at risk of becoming sick.

“It is clear to anyone working a flight that the current environment of inconsistent and voluntary airline policies is not working as it should,” Carr says. “These airline policies and practices are poorly communicated to crew and passengers alike, leaving flight attendants to risk our health and safety while attempting to manage the otherwise avoidable conflicts that result,” she adds.