Investigators have determined that a WestJet Encore Bombardier Q400 suffered damage at Edmonton after de-rotating sharply during a high-speed landing.

The Q400 – arriving from Fort McMurray on 19 July last year – had been approaching Edmonton’s runway 12 with storms in the vicinity of the airport.

Its captain opted for a high approach speed of 142kt, about 20kt above the reference, owing to the possibility of a missed approach and the risk of windshear. The crew also planned a “firm landing”, says the Transportation Safety Board of Canada, because of gusting conditions.

Flight-data recorder information shows the Q400 did not reduce speed before touchdown and the aircraft’s main landing-gear sensors briefly switched from ground mode, after touchdown, back to air mode.

The captain then made a full nose-down input to the control column, and the aircraft sharply de-rotated – by 10°/s rather than the typical 4°/s. This was followed by a “bang” and a nose-wheel shimmy, says the inquiry, and the aircraft pulled to the left during roll-out.

Analysis of flight-recorder data shows both the main and nose landing-gear switched to ground mode “nearly simultaneously”, it adds. 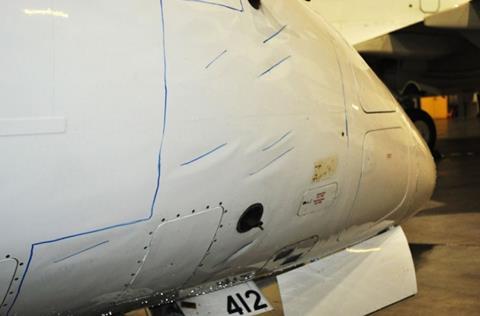 While no hard landing was indicated to the pilots, they requested maintenance support after taxiing off the runway – although personnel could not attend for 45min owing to a lightning alert.

Both nose-gear tyres were changed before the aircraft taxied to the gate to disembark passengers. Further detailed inspection showed the aircraft had sustained substantial fuselage skin wrinkling on its nose as well as damage to the nose-gear door, nose-gear assembly, and forward bulkhead.

None of the 74 occupants was injured.

WestJet Encore’s operating manual states that crews should add half the gust factor – to a maximum of 10kt – to the normal approach speed when flying in gusting conditions.

This should have resulted in the Q400’s flying at 135kt, and reducing speed to the reference of 122kt at touchdown. The nose-wheel should then have been “promptly” brought into contact with the ground after the main-gear touchdown, says the inquiry.

It states that the damage to the aircraft (C-FKWE) occurred when the nose of the aircraft was lowered at a higher rate than normal, following the high-speed touchdown, and adds that the accident highlights the “importance of flight crews’ adhering to operational procedures and techniques”.