Scorpion will not be proposed for USAF T-X competition

Textron AirLand’s Scorpion in its current form has been ruled out as a competitor for the US Air Force’s T-X next-generation trainer programme to replace the Northrop T-38, according to the joint venture’s president Bill Anderson.

The requirements template for T-X has evolved considerably ahead of an anticipated competition in 2017, and Textron’s engineering analysis suggests the air force now wants a high-performance fly-by-wire trainer with top tier handling qualities, and not a low-cost advanced jet trainer requiring little development.

“From the engineering analysis we have done, this looks like a very complex, high-performance aircraft that in our estimation is going to be pretty expensive,” says Anderson. “Scorpion as-is is not a competitor for T-X.” 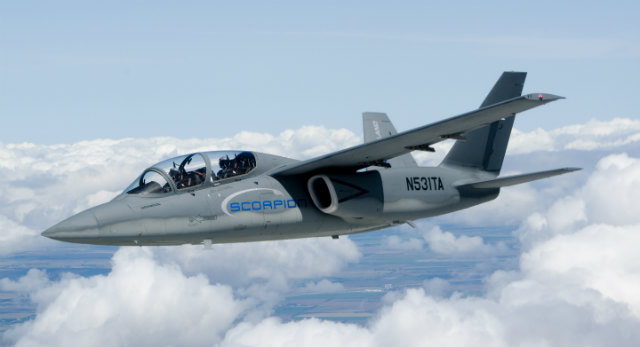 According to a July statement from the USAF's Air Education and Training Command, the service wants an aircraft capable of 7.5g turns “while losing no more than 2,000ft of vertical altitude and 10% of the initial airspeed”.

The air force is mostly interested in an aircraft that will prepare its pilots to operate fifth-generation fighters such as the Lockheed F-22 and F-35 – but also sixth-generation aircraft to be introduced in the 2030s, as T-X could be in service for up to 50 years.

Anderson says T-X appears to need “Level 1 handling qualities” and probably fly-by-wire controls to achieve the draft performance requirements, and probably also needs to be a supersonic aircraft – although that is not presently an objective.

Boeing, Lockheed Martin and Northrop Grumman are each pursuing T-X with clean sheet designs, and flying prototypes are already being assembled.

Anderson says Textron is still involved in the air force’s industry engagement process, but has not decided whether to compete.

“We continue to look at it; we continue to provide the air force feedback and the company has made no decisions at all on it,” he says. “We are interested, obviously, because it’s a big programme, but we continue to watch the programme evolve.

“We’ve got the Scorpion ISR/strike attack airplane and we’re really concentrating on getting that sold.”