Indonesia has expanded the search area for flight QZ8501 as search efforts enter into the third day, still with no signs of the missing Indonesia AirAsia Airbus A320.

Indonesia’s National Search and Rescue Agency (Barsanas) shared that the search area has expanded to 13 sectors, up from the seven sectors it focused on yesterday, and the original four sectors on the first day of its mission.

The search now extends over a large portion of the Java Sea, including further south of Pulau Belitung and further north of Bangka Belitung Island. 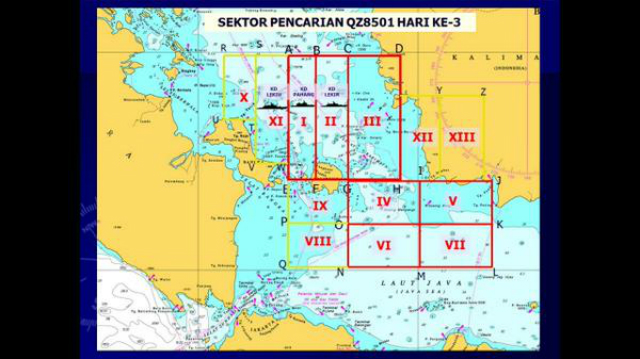 Barsanas says it has so far received two signals radiating from around the crash site, but further investigations found that they were not linked to the missing aircraft.

An Indonesian Air Force Lockheed Martin C-130 also spotted two oil slicks 105nm from Tanjung Pandan, but that too did not originate from QZ8501, it adds.

A series of tweets from Indonesia’s transport ministry state that 29 ships, 13 aircraft, and 10 unnamed units are involved in the day’s search, as of 10:00 local time.

France and China are believed to be sending aircraft and ships to aid in search efforts, while the United States Navy has also received Indonesia's request for assistance and has reportedly dispatched the USS Sampson, a guided-missile destroyer.

Meanwhile, the Civil Aviation Authority of Singapore says it has offered a sidescan sonar system and a robotic remotely-operated vehicle. This is on top of the two sets of underwater locator beacon detectors and four specialists from the country’s air accident investigation bureau it has deployed.

In a statement, Indonesian president Joko Widodo says he has ordered the country’s transport minister to review all flight procedures, as well as aircraft conditions.

He did not specify whether the review will apply only to aircraft belonging to Indonesian carriers or include those flying within the country’s airspace. “This is a preventive and improvement measure, as suggested by (the) International Civil Aviation Organisation (ICAO),” Widodo adds.

He has also asked Indonesia’s meteorological, climatology and geophysics service to improve future information sharing on the weather situation with airlines.

Indonesia AirAsia has not released further updates. AirAsia group chief executive Tony Fernandes, who is in Surabaya to lend support for the search operation, tweeted that he has met with the families of the crew and pilots.

Flight QZ8501 lost contact with air traffic control while enroute from Surabaya to Singapore on 28 December, after its pilots asked to ascend from 32,000ft to 38,000ft to avoid stormy weather. No distress signal was received from the aircraft which was carrying 155 passengers and seven crew members.