Selex ES has provided further details about the sensor package being developed for Saab’s Gripen E fighter, as key elements of the system are due to soon be flown together.

A final hardware version of the Raven ES-05 active electronically scanned array radar was shipped to Saab’s Linköping site in Sweden from the UK in mid-March, along with its power supply, receiver and processor, for installation in development aircraft 39-7. Featuring 1,000 transmit/receive modules, the sensor also will use a repositioner, to increase its field of regard to +/-100˚. 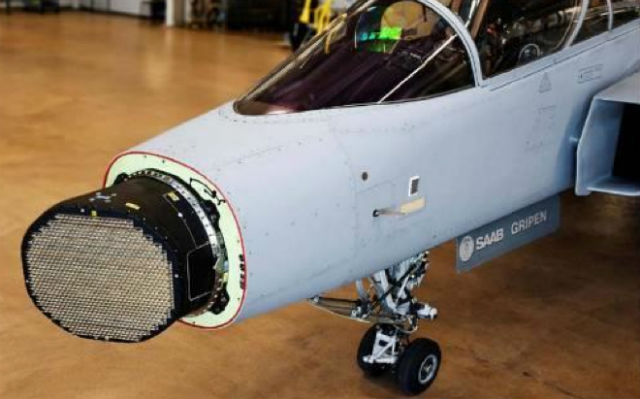 Also being installed is the aircraft’s Skyward-G infrared search and track (IRST) sensor head (file image below) and processor unit, which will deliver a passive, long-range detection and identification capability, against even stealthy threats out to beyond-visual-range air-to-air missile engagement range.

The IRST package was flown aboard a helicopter in Nerviano, Italy earlier this year, and is “detecting and tracking, with a very low false-alarm rate,” says Bob Mason, executive vice-president, radar and advanced targeting at Selex ES’s Airborne & Space Systems division. 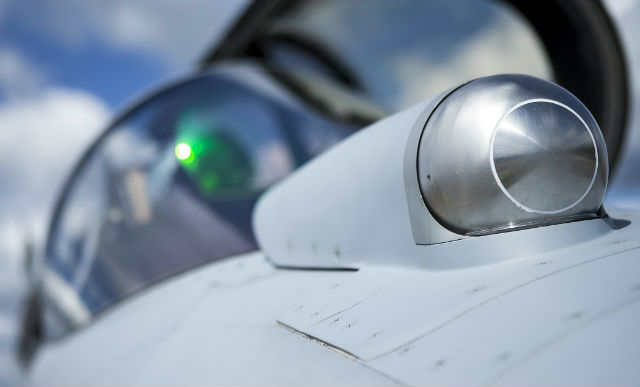 The Gripen E’s interrogation friend-or-foe system equipment will also have a range capability to match that of the Raven sensor, Mason says. This will be installed with steerable antennas mounted in front of the IRST sensor and on either side of the aircraft’s nose.

Meanwhile, Selex ES is to demonstrate its expendable BriteCloud radar frequency decoy from a Gripen later this year. “We are seeing a lot of interest for the Gripen, and from other fighter manufacturers,” Mason says.