The minimum target is 12.2t (27,000lb) over 110nm in high, hot environments, which US Naval Air Systems Command officials expect the in-development aircraft to comfortably achieve. However, CH-53K integrated product team deputy Col John Neville says it is too early to tell exactly what external load target the CH-53K will meet or what programmatic steps the NAVAIR might take to bump up the aircraft’s performance to the objective requirement.

“From an acquisition and requirements standpoint, that’s the trade space,” Neville said during a teleconference briefing at the 72nd annual American Helicopter Society (AHS) International meeting in West Palm Beach, Florida on 19 May. “The engines are extremely powerful, but one of the things we do know is right now we’re probably somewhere in-between those two values [of 27,000lb and 30,000lb].

“That’s all from an analysis standpoint right now. As we continue to put the aircraft through its paces, we get to refine where it’s at. We’re not specifically targeting the lower band, we’re obviously shooting for the 30,000lb design.”

He says once the aircraft’s true lifting capacity is validated through envelope expansion, the programme office will try to figure out what the limiting factors are and what improvements could be pursued to increase external lifting capacity. The fly-by-wire, triple-engine aircraft is designed with roughly three times the lifting capacity of the Sikorsky CH-53E model that it will replace. 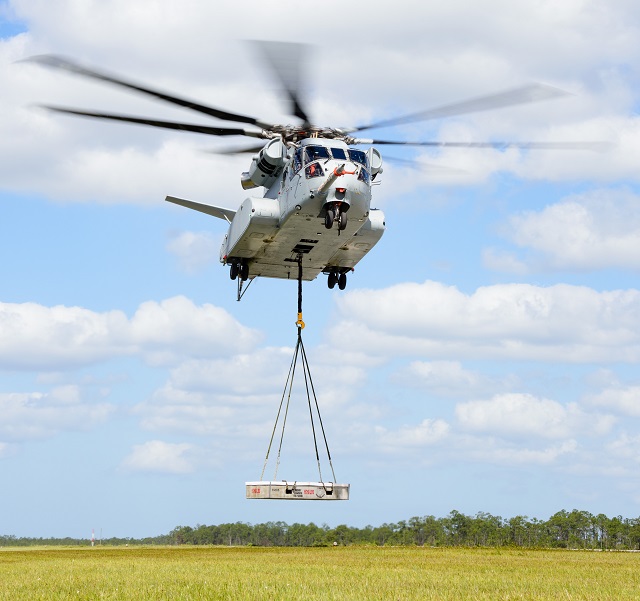 The aircraft has three external hooks for ferrying armoured vehicles, artillery pieces and other equipment assigned to the Marine Air-Ground Task Force (MAGTF). It will become the US military’s primary means of transporting heavy materiel and troops into hostile combat zones by helicopter as a compliment to the lighter 22.6t maximum gross weight Boeing CH-47 Chinook. 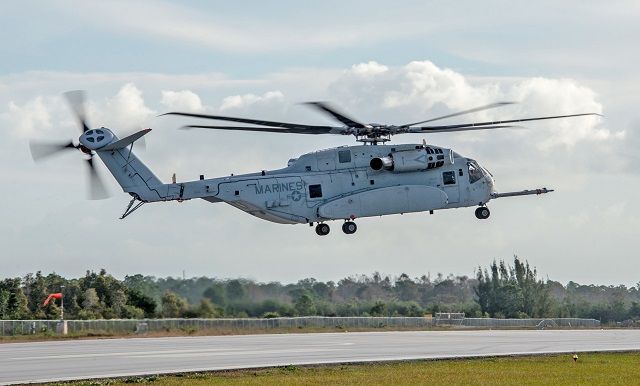 According to programme officials, the US Navy does not plan to replace the MH-53E Sea Dragon airborne mine countermeasures aircraft with the CH-53K, as it has other systems fulfilling that role going forward.

Future customers could include existing CH-53 operators Germany, Israel and Japan. Sikorsky foresees a market for up to 300 of the specialised heavy-lift helicopters, including the 200 Marine Corps examples.