ST Engineering has revealed new business for its Airbus A321P2F programme at the Singapore air show, as it works towards securing certification for the freighter conversion later this quarter.

The modification is being developed by ST Engineering and Airbus, alongside their EFW joint venture. The first A321P2F post-conversion test flight was completed on 22 January from ST Engineering’s facility at Seletar in Singapore. ST Engineering expects to receive a supplemental type certificate from the European Union Aviation Safety Agency by the end of the first quarter of 2020. 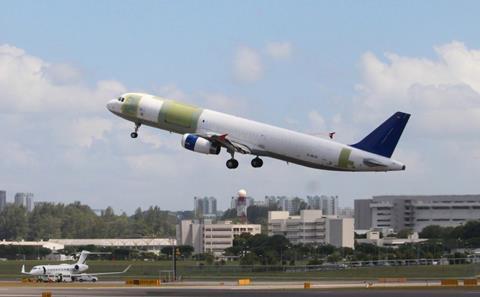 Aircraft lease-management specialist BBAM has confirmed a letter of intent announced in June 2019 for “several” A321P2F conversions, says ST Engineering. It adds that BBAM’s first A321P2F entered the Seletar conversion facility in January. Modification of the second unit will begin in March.

Meanwhile Keystone Holdings, an ST Engineering leasing joint venture, has signed a letter of intent with Qantas for the conversion and lease of an A321P2F. The aircraft, which is currently operated on lease by Qantas Group in the passenger role, will be converted by ST Engineering and delivered at the end of 2021.

Qantas’s freight division is already set to be launch operator for the A321P2F, taking the first converted airframe later this year via lessor Vallair.

EFW chief executive Andreas Sperl says that the A321P2F offers up to 14 container positions on the main deck and 10 on the lower deck. He adds that the aircraft has “a payload-range capability to fly over 2,300nm [4,260km], carrying up to 27.9t”.