Delta to base A330neos in Seattle from July

Delta Air Lines will base its first Airbus A330-900neos at its Seattle Tacoma gateway, with flights to Asia beginning in July.

The Atlanta-based SkyTeam carrier says it will use the aircraft for flights to Shanghai Pudong from 1 July, Seoul Incheon from 31 July, and Tokyo Narita from 31 August.

"Delta will nearly double the premium seat offerings to both local and connecting customers in our top Asian markets by the end of this summer, with additional services to come," states Delta president Glen Hauenstein. "It's our latest step as we continually expand and enhance our Seattle hub."

Delta will configure its A330-900s for 281 passengers, including 29 in business-class suites, 28 in premium economy, 56 in extra-legroom economy seats, and 168 in standard economy. The aircraft will also feature Delta's new internally developed in-flight entertainment system, which debuted on the A220 earlier this month. 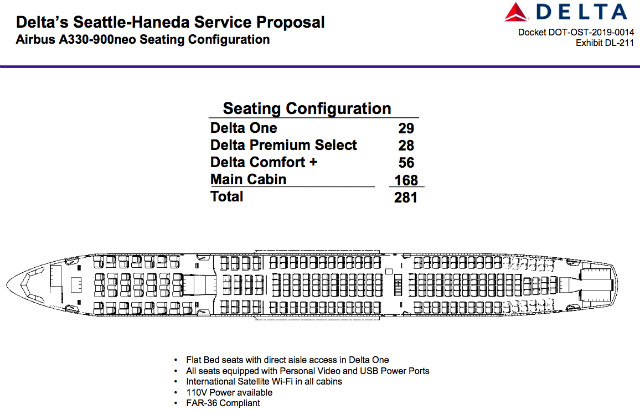 The airline expects four A330-900 deliveries by year-end.

In addition to using the larger aircraft, the carrier plans to resume flights to Osaka Kansai from Seattle in April. However, it ended a Hong Kong service in October.

Transpacific operations for the A330neo have been in the works since at least 2016. That December, Delta chief financial officer Paul Jacobson said the A330-900, as well as the A350, would be used to replace Boeing 747s to Asia.

"We’re going to drive significant efficiencies in seat cost across the Pacific, while enhancing the customer experience and dramatically reducing our overall costs compared to the 747," he said of the two Airbus widebodies that were on order at the time.

The carrier also plans to operate the A330-900 to Tokyo Haneda, if it secures slots at the close-in Tokyo airport for the flight from the 12 available to US carriers that authorities are in the process of awarding.