Japan Airlines is targeting to connect 500 destinations by the end of April 2020 by leveraging on its partnerships with other carriers, the airline disclosed in an update to its medium-term management plan.

The 500 destinations target was listed among three key network expansion initiatives, which included preparing for “functional improvements at Haneda and Narita” airports, and continuing refinement of its various passenger brands to best serve their respective markets.

The latter point includes planning for the launch of a new mid- and long-haul low-cost carrier, which was first raised in May 2018. That as-yet unnamed airline will complement Jetstar Japan, which will continue to focus on short- and mid-haul routes. 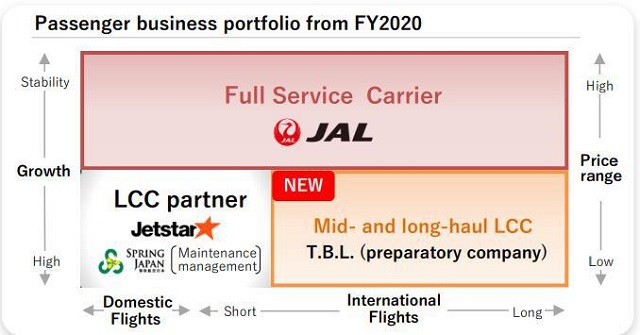 It is also planning a number of enhancements to the airport experience for passengers, such as greater use of self check-in and baggage drop machines, facial recognition identification for international flights, and automated gates.

It has also reiterated plans to invest in adjacent businesses. In line with that, it has established a business jet joint venture with Marubeni Corporation, and flagged plans to move into the financial technology and digital marketing space in partnership with other companies.

In the short term, it has put its focus on rebuilding public trust. This comes after Japan’s transport ministry issued it with a business improvement order after a number of incidents where JAL pilots were found to be over the legal alcohol limits before their flights.

JAL says it is “determined to act swiftly to rebuild the foundation for a safe and secure operational structure.”