Porter pushes back restart to December

Canada’s Porter Airlines has pushed back its restart date for the sixth time as ongoing travel restrictions in Canada hamper the industry’s overall recovery in that country.

The Toronto-based regional airline suspended operations in March due to the coronavirus health emergency, and says it now plans a 15 December restart. 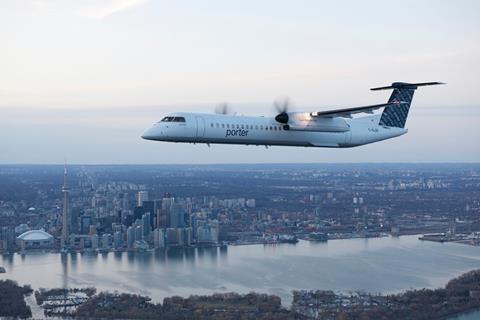 “We want to see our planes in the sky as soon as possible and are actively working to prepare for our resumption of service,” Porter writes on its website on 13 October. “However, the ongoing uncertainty presented by government travel restrictions, including border closures, is impacting our ability to operate flights.”

“We are closely watching developments and know that Porter will be an important part of providing people with travel options as the economy recovers,” the airline adds.

The government of Canada maintains some of the strictest travel restrictions in the world, including a mandatory 14-day quarantine for all inbound passengers. Some individual provinces also have distinct isolation requirements implemented to stop the spread of the highly-communicable virus, making travel within the country difficult and complicated.

In addition, the border to the United States has been effectively sealed to non-essential travel since 21 March, with uncertainty about when it will reopen.

Porter is Canada’s third-largest airline after Montreal-based Air Canada and WestJet, headquartered in the western city of Calgary. The regional airline serves 19 destinations in eastern and central Canada as well as the northeastern USA.

The carrier has a fleet of 29 De Havilland Canada Dash 8-400 aircraft, with orders for 12 Airbus A220 aircraft, according to Cirium fleets data.