One year since it opreated its first nonstop Perth-London flight, Qantas has lauded it as a major success for the company and Australian tourism.

The airline released a special “report card” to commemorate one year since its first flight on the route, which shows that the average load factor on the route has been around 94% on its 236-seat Boeing 787-9s.

“There were a lot of expectations around this flight, both within Qantas and the broader community, and frankly it’s exceeded them,” commented chief executive Alan Joyce.

He adds that the strong loads mean the route “turned a profit almost immediately, which is rare for new services because they have start-up costs and it normally takes time to build demand.” 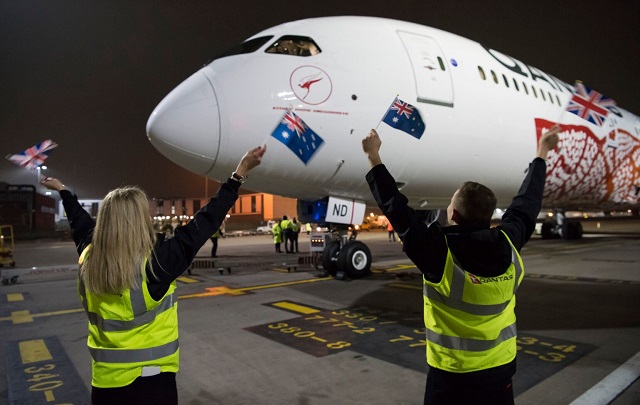 The airline also released data showing that just under 60% of passengers on the route originate from Australia, with 31% from the United Kingdom. Of those passengers originating in Australia, around half start their journey in Perth, 25% from Melbourne where the flight commences, 7% from Sydney and 6% from Brisbane.

“A year of operating this route shows that a hub in Western Australia [state] connecting Australia to the world works really well. We have people coming from the east coast to join the flight and it’s made it a lot easier for people in Europe to visit Australia,” says Joyce.

The airline has previously noted that the success of the Perth-London route could see it launch services via the western hub to Frankfurt and Paris. For now though, those plans are on hold because of a pricing dispute between Perth airport and Qantas.

Operationally, the route has also been a strong performer, with only four services cancelled over the year, giving it a reliability rating of 99.5%.

Although the flight is scheduled to take around 17h, a number have arrived into Perth earlier than scheduled due to favourable weather conditions, with some of the flights in both directions breaking speed records.

“We didn’t plan to regularly break speed records in both directions. The current title holder arrived into Perth from London a full hour ahead of schedule thanks to prevailing winds and our new flight planning system,” says Joyce.