French investigators have determined that a Swiftair Boeing MD-83 lost over Mali entered a rapid spiral descent from which it failed to recover.

But the inquiry is being hampered by a lack of usable information on the cockpit-voice recorder.

The aircraft, operating an Air Algerie service from Ouagadougou on 24 July, had deviated to the left of its flightpath to skirt around a storm system covering the northern tip of Burkina Faso. 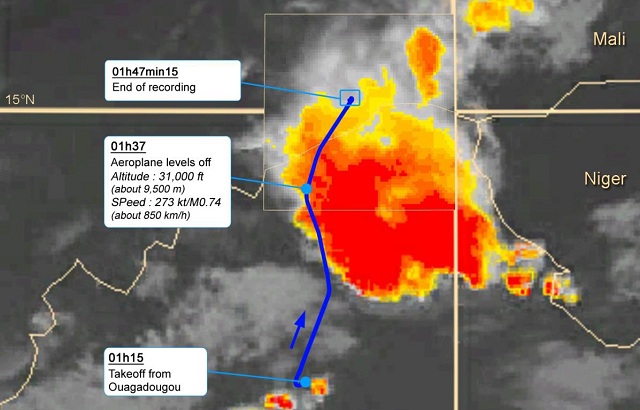 French investigation authority BEA describes the course change as “moderate”, typical of an adjustment to avoid such weather. During this deviation, some 22min after take-off, the aircraft levelled off at its cruising altitude of 31,000ft at about 01:37UTC.

But just 2min later, as it neared the northern edge of the storm, the aircraft – which had been travelling at 273kt – began to lose speed.

Its speed deteriorated to 160kt and the aircraft started descending, says BEA, before the MD-83 suddenly began turning left, losing height rapidly. The inquiry says it experienced “large changes” in pitch and bank.

The aircraft entered a spiral descent, making about one and a half rotations. Its flight-data recorder gave a final height reading of 1,600ft and a speed of around 380kt, shortly after 01:47UTC. 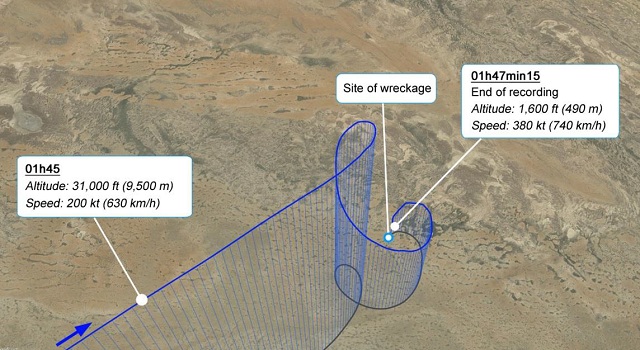 BEA chief Remi Jouty says about 1s elapsed between this last recorded point and the impact with the ground, just over the Malian border in the Gao region.

While the flight-data recorder has allowed the investigation to draw up a flightpath, aspects of the aircraft’s performance and behaviour have yet to be assessed.

Jouty also states that the cockpit-voice recorder was “badly damaged” in the impact.

Despite this, the tape inside was recovered and read but Jouty says: “Unfortunately the recordings it contained cannot, so far, be used.

“We’ve commenced actions to see whether we can extract information from this tape. It’s too early to say whether we’ll be able to achieve anything.”

He says there are unintelligible sounds on the tape but the inquiry has not established the reasons why the recording is poor. Jouty says that the problem is “not due to the crash”.

“We’re using the best specialists in the field to see what can be done,” he adds.

Lack of cockpit-voice data has prompted the inquiry to prioritise the collection of information from alternative sources, including air-ground transmissions as well as possible communications between the Swiftair pilots and the crews of other aircraft.

“This should give us some information on what the crew considered doing,” says Jouty.

Three international working groups will focus on the wreckage and final trajectory of the aircraft, reconstruct the history of the flight, and gather weather, air traffic control and other data. Mali’s commission of inquiry, which is leading the investigation, will publish an interim report in mid-September.