Thomas Cook to lease A330 from AirTanker

Thomas Cook Airlines has entered into an agreement to lease the first Airbus A330-200 which will form part of AirTanker’s “surge” fleet of Voyager tanker/transports for the UK Ministry of Defence.

The leisure charter carrier will use the modified widebody for an initial three-year period under the terms of a new letter of intent, with operations to start on 1 May 2015. The A330 will be employed on routes from Glasgow, Manchester and Stansted to locations including Cancun, Las Vegas and Orlando. However, due to the Voyager modification’s use of some restricted US content, the aircraft will not be permitted to visit some locations, including Cuba.

AirTanker Services will add the aircraft to its existing air operators certificate, with the commercial customer to use it under a “damp lease” agreement. This will see six of the carrier's captains and four first officers seconded to AirTanker, to fly alongside its own civilian pilots.

They will also support operations with the company’s one unmodified A330, G-VYGG, which performs scheduled flights between the UK and the Falkland Islands twice per week. Cabin crew will be provided by Thomas Cook.

“AirTanker approached us 12 months ago to see if we might be interested in such a deal,” says Christoph Debus, chairman of Thomas Cook Airlines. The companies, which announced details of the agreement on 24 June, expect to finalise a contract by around September, he adds.

“We saw a very good win-win situation,” Debus told Flightglobal during an interview in London on 23 June. “We have a very reliable partner, and [the deal] fits very well within our growth strategy. We are convinced it will be a success for both sides.” Describing negotiations as “tough”, he adds: “We think it’s a fair deal: this is a market-based calculation.” 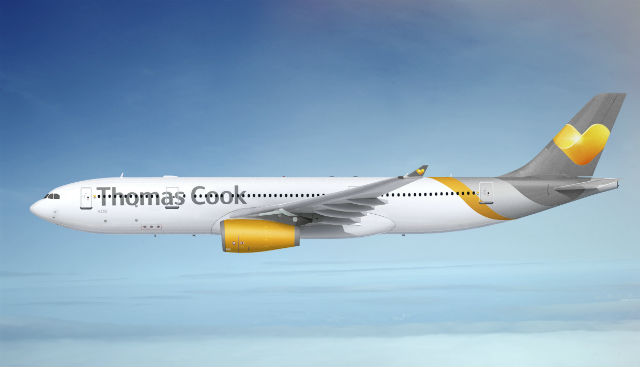 Following its conversion into a two-point tanker at Airbus Defence & Space’s Getafe site near Madrid, Spain, the new A330 will be flown to AirTanker’s facilities at RAF Brize Norton in Oxfordshire in February 2015 to be prepared for civilian operation. This will involve the removal of military systems and the reconfiguration of its cabin from the Voyager’s 291-seat configuration into an all-economy, 323-seat layout. 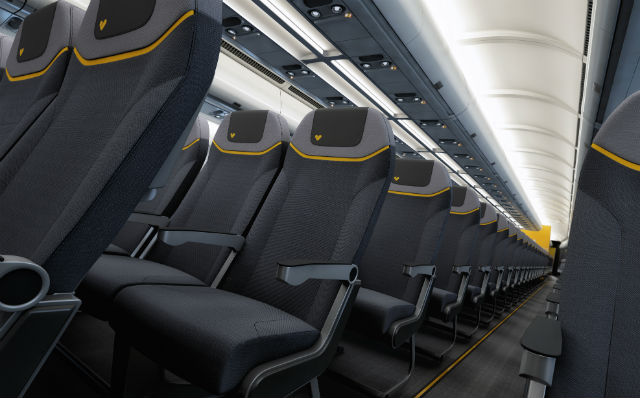 Debus says while the AirTanker aircraft is slightly different to Thomas Cook’s existing A330s, it will get the same Acro seats (above) and in-seat video now being introduced as part of a fleet modernisation activity to run through to 2016. “It will be fully consistent with what we offer going forward from next winter on all of our long-haul aircraft,” he notes.

Unlike the eight Voyager tanker/transports already in use with the RAF’s 10 and 101 squadrons and AirTanker’s G-VYGG, the new aircraft will be painted white and receive Thomas Cook livery. AirTanker will perform “depth” maintenance at its Brize Norton site, with the carrier to conduct line maintenance tasks. 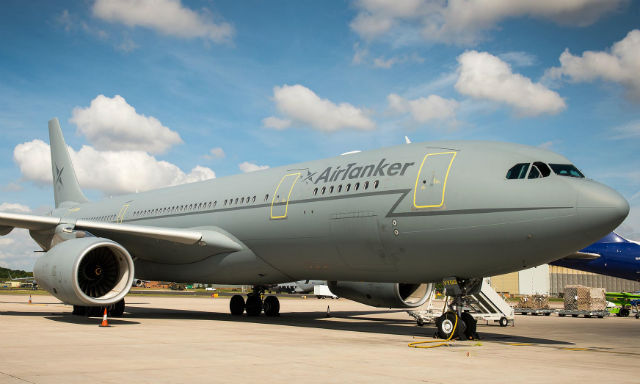 While the initial contract is to be for a three-year term, Debus says Thomas Cook is “very open to extend this partnership”. He adds: “If everything goes according to plan of course we are willing to extend this current deal for one aircraft, or maybe to add some other aircraft.”

“We certainly would hope that there is the potential to place more aircraft with Thomas Cook,” says Dave Mitchard, managing director of AirTanker Services. However, as the company believes it is “highly unlikely” that it will place all five of the UK’s “non-core” Voyagers with a single operator, he says it is also “pursuing other opportunities” in the civilian and military markets.

AirTanker’s private finance initiative deal with the MoD is due to run until 2035, with the last of 14 Voyagers due to be delivered by the fourth quarter of 2016.

Debus says the “surge” element of the MoD’s contract with AirTanker – under which it can call on non-core aircraft to be prepared for military use within 90 days – is “a risk we are able to handle”. Mitchard says “the probability of recall is very low”.

Pointing to a transformation programme launched in mid-2012, Debus says: “We as Thomas Cook are going for a profitable growth strategy. Before, we were running four airlines basically totally separate. We brought them all together under one leadership and have significantly strengthened our long-haul business.”

Combined with its investment in cabin refurbishments and an acquisition of 27 new A321s, Debus says the deal with AirTanker is another “very good opportunity to fuel our growth plans”.