United Airlines will move into the new boarding area E at San Francisco International airport on 28 January, as it continues to leverage the hub to expand its operations to Asia.

“We are delighted to be moving into this beautiful new boarding area,” says Jeff Smisek, chairman, president and chief executive of the Chicago-based Star Alliance carrier, during a media event on 24 January. 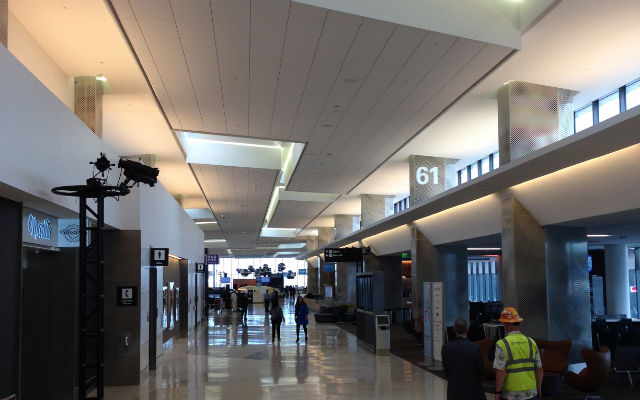 The 10-gate concourse – gates 60 to 69 – in the airport’s terminal 3 will primarily handle mainline domestic operations for United. Three of the gates – 64, 66 and 67 – can handle widebody aircraft up to a Boeing 777.

The $138 million Gensler-designed facility builds on San Francisco airport’s success in terminal 2. This includes airy spaces with a clear vista of aircraft departing on runways 28R/10L and 28L/10R, concessions and eateries that airport director John Martin calls “luxury”, and the numerous power outlets and free wi-fi that today’s travellers, especially those from the Silicon Valley, demand.

“[In] today’s world everyone’s going to be ticketing themselves, checking their own bags and getting through TSA as quickly as possible,” says Arthur Gensler, founder of the firm that bears his name. “What we wanted to do was make sure that [after] they go through was where the real opportunity began.”

United is investing $50 million in the boarding area in addition to the airport's construction costs. This includes a new United Club, elite frequent flier check-in area and flight operations centre.

The new concourse represents more than a modern facility designed for tech savvy travellers and an opportunity to consolidate operations, it is also a symbol of United’s investment in San Francisco and Asia.

“San Francisco is the premier Asian gateway from the United States… [and] is key to our growth strategy to Asia,” says Smisek.

That strategy is targeting secondary cities in Asia, with the first addition being new three-times weekly service to Chengdu, China, on a Boeing 787-8 starting 9 June.

Smisek declines to comment on where United is looking after Chengdu but, acknowledging that the airline does have a short list of possible destinations, says that those nonstop flights will likely originate in San Francisco.

Andy Buchanan, managing director of international planning at the carrier, told Flightglobal in September 2013 that future destinations could include Guangzhou and other second tier cities in China.

United is feeling pressure in Asia. Pacific passenger unit revenue fell 5% and yields were down 1.6% during the fourth quarter of 2013 compared to a year earlier.

The issue is more pronounced in China. Jim Compton, the airline’s chief revenue officer, said that a 20% increase in capacity between the USA and Beijing and Shanghai on competitors has put pressure on yields, during an earnings call on 23 January.

Service to Beijing and Shanghai will not be cut as United expands to second tier cities, says Smisek in response to questions on the competitive pressures.

“[San Francisco] has things that LA and Seattle will never have in terms of the traffic flows [and] the propensity of people to travel,” he says. “The demand for long-haul travel to Asia from San Francisco is far superior to LA and Seattle.”

Specifically on Delta’s new flights, which include nonstops to Hong Kong and Seoul that begin this June, he says: “I’m watching it carefully and over time we’ll see.”