Since before Igor Sikorsky hovered the collection of tubes, gears and rotors that was the USA’s first practical helicopter, people have tried to make rotorcraft lift more and fly faster. Compared with the progress made by the fixed-wing folks since the Wright brothers, the rotary-wing community has not had much success. 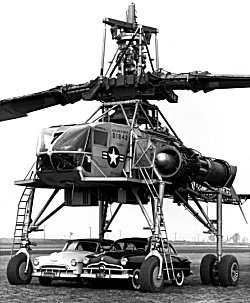 The reasons are not just technical. Despite their manifest usefulness, helicopters have not benefited from the sustained development that took fixed-wing aircraft from the Wright Flyer to the Mach 3 Lockheed Blackbird in just 60 years.

Even as Sikorsky was testing his VS-300 in 1940, Germany’s Focke-Achgelis was designing the Fa.284, a twin-rotor flying crane capable of lifting a 7t (15,400lb) load. Wartime difficulties stopped the work, although the side-by-side rotor layout was to reappear later – and in a big way – with Mil’s V-12, the world’s largest helicopter, which lifted a 40t payload in 1970 but never entered production.

The USA took a different tack. Inspired by a lumber carrier with its underslung load, the US Army Air Force in 1946 awarded Kellet Aircraft a contract to design the XH-17 heavylift helicopter. The programme was taken over by Hughes Aircraft in 1949, and the helicopter finally flew in October 1952.

The state of the art ruled out a conventional transmission, so the XH-17’s 39.6m (130ft)-diameter two-blade rotor – still the largest ever flown – was powered by tip jets. Two General Electric TG180 turbine engines acting as compressors fed air to kerosene burners at the tip of each blade.

The XH-17 lifted more than 4.5t, but high fuel consumption meant it fell far short on range. Rotor vibration and fatigue were also problems and flying stopped after just 12h in 1955 when blade life was used up. Construction of the bigger XH-28, designed to lift 18t, was abandoned when the Korean War diverted funding.

Returning to the concept in 1971, the US Army awarded Boeing Vertol a contract to develop the XCH-62A Heavy Lift Helicopter (HLH) – a massive tandem-rotor flying crane capable of lifting 35t and transporting a 22t payload 175km (95nm). The biggest US helicopter ever built, the XCH-62A was the first with fly-by-wire flight controls.

The prototype was almost complete when Congress cancelled the HLH programme in 1975, citing cost and other problems. In 1984, NASA and others proposed completing the unflown prototype as a heavylift research vehicle, but this was abandoned. To the anguish of helicopter historians, the XCH-62A was finally broken up in October. 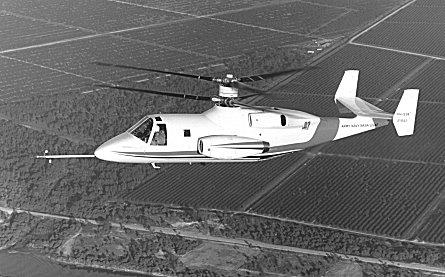 Originally part of a joint HLH programme, the US Navy wanted a smaller helicopter capable of operating from ships and went on to develop the three-engined Sikorsky CH-53E. Now the US Marine Corps plans to develop the higher-payload CH-53X Heavy Lift Rotorcraft (HLR), capable of carrying up to 13.6t over 200km.

At 37,200kg – well short of the HLH’s 67,100kg gross weight – the HLR will be the USA’s heaviest operational helicopter unless the DoD proceeds with the Joint Heavy Lift (JHL) rotorcraft, which is intended to carry a 20t payload over 500-550km. Five JHL concepts are being studied – a Boeing large tandem-rotor design; Bell Boeing Quad Tilt Rotor; Frontier Airc­raft Optimum Speed Tilt Rotor; and two Sikorsky coaxial-rotor designs – a 165kt flying crane and a 245kt compound helicopter. 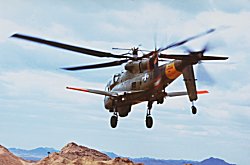 High-speed compound helicopters – combining a rotor for vertical flight with some form of propulsion and, usually, a wing for forward flight – have been a recurring gleam in designers’ eyes since before Fairey set a speed record of 108kt in 1948 with its propeller-and-rotor Gyrodyne.

The compound nearly made it with the AH-56 Cheyenne attack helicopter, developed by Lockheed for the US Army in the late 1960s. This used rigid rotor technology demonstrated on Lockheed’s XH-51A, which exceeded 175kt as a pure helicopter and, turned into a compound by adding a Pratt & Whitney J60 turbojet, set an unofficial speed record of over 263kt in 1965.

First flown in September 1967, the Cheyenne had a single General Electric T64 turboshaft powering the main rotor, tail rotor and a pusher propeller. The helicopter reached 214kt, at which speed almost all the engine power went to the propeller. The programme was cancelled controversially in 1972 because of technical problems and cost escalation.

In competition with Lockheed’s design, Piasecki had offered a compound helicopter with a “ring tail” ducted propeller, first featured in the company’s civil 16H-1 Pathfinder. With US Army funding, the company fitted a bigger engine, rotor and propeller and the modified Pathfinder II exceeded 195kt in 1966 – a success that ensured the AH-56 would be a compound.

Piasecki abandoned the Pathfinder, but not the idea of compounding helicopters. In 2000, it won a contract to flight-test a vectored thrust ducted propeller (VTDP) helicopter based on the Sikorsky H-60. Now, five years later, Piasecki is beginning ground tests of the X-49A – the YSH-60F prototype fitted with a wing and VTDP, which promises to boost speed by 50kt to 200kt – but flight testing depends on funding and is unlikely before 2007.

Most compounds offload lift from the rotor to a wing at high forward speed, to avoid stalling the rotor’s retreating blade (the one moving away from the oncoming air). Although unloading the rotor allows faster forward flight, in vertical flight the wing gets in the way of the rotor’s downwash, reducing hover efficiency.

In the 1970s, Sikorsky solved this with the Advancing Blade Concept (ABC) helicopter. This uses two closely spaced, very stiff, coaxial counter-rotating rotors. Lift is generated by the advancing blades on both sides and the retreating blades are unloaded, eliminating the stall and avoiding the need for a wing.

Sikorsky built two XH-59A ABC research aircraft, the first flying in July 1973. As a pure helicopter, the XH-59A had better hover efficiency and lower noise, and maintained its speed to higher altitudes. After conversion in 1978 to a compound helicopter, by adding two J60 turbojets, the XH-59A reached 238kt in level flight, the speed limited by engine thrust and the rotors essentially autorotating.

Although successful, the experimental XH-59A had four engines, two of them thirsty turbojets, a complex transmission and draggy rotor head. An XH-59B with a ducted propeller driven by the same pair of turboshafts powering the rotors was not pursued. The ABC was again looked at in the mid-1980s, for what became the ill-fated RAH-66 Comanche, but the transmission weight penalties were too high.

Now Sikorsky is returning to the ABC with plans to fly the company-funded X2 Technology Demonstrator at the end of 2006. With an expected cruise speed of 250kt, the experimental helicopter will have a single LHTEC T800 turboshaft driving two four-blade coaxial rotors and a pusher propeller. 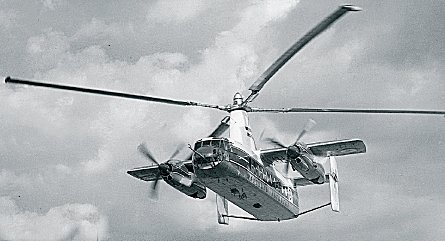 Advances over the XH-59A, Sikorsky says, include fly-by-wire controls, active vibration suppression, rotor-hub drag reduction, and a high power-to-weight transmission that “seamlessly” transfer power from rotors to propulsor. The company plans to apply X2 technology to a range of designs, including the JHL.

The need for a transmission that can transfer power between the rotor and propulsor has been a complication of compounds. One solution is to find another way to drive the rotor. Tip-jet, or reaction-drive, rotors are another avenue that has been pursued on and off for years.

Flown by Austrian Friedrich von Doblhoff in 1943, the WNF-342 used a pressure-jet rotor in which compressed air was mixed with fuel, ducted to the blades, and burned in tip nozzles. One of the helicopters was brought to the USA at the end of the war, while Doblhoff joined McDonnell Aircraft. The result was the XV-1, an experimental rotor-and-wing “convertiplane” that flew in July 1954.

In vertical flight, the XV-1’s piston engine drove compressors that fed air to burners at the tips of the rotor blades. In forward flight, engine power was transferred to a pusher propeller, while the rotor autorotated. The XV-1 made its first transition from helicopter to aeroplane mode in 1955 and became the first rotary-wing aircraft to exceed 200mph (174kt), but this was not enough of an advance over the helicopters of the day and the programme was terminated in 1957.

While US work then took a different direction, Europe took the tip-jet concept more seriously. France’s SNCASO had flown the SO.1310 Farfadet in 1953, with a turboprop in the nose and a turboshaft driving a compressor to power the rotor, but the UK’s Fairey made most progress. After flying the modified Jet Gyrodyne in 1954-5 to test the pressure-jet rotor concept, the UK company began developing the Rotodyne, a 48-passenger short-haul airliner that first flew in November 1957.

The Rotodyne used tip burning to power the rotor for vertical and forward flight to 50kt, when the tip jets were extinguished and two wing-mounted Napier Eland turboprops took the helicopter to speeds up to 166kt – a record at the time – with the rotor autorotating. Tip-jet noise was a major problem, but had been largely solved when politically motivated industry consolidation killed the programme in 1962. The concept is now being revived with the Groen Brothers Heliplane – a 350kt gyrodyne X-plane that the US Defense Advanced Research Projects Agency hopes will be enough of an advance over today’s rotorcraft to finally establish the concept.

While the UK was working on the Rotodyne, the concept of a “hot cycle” pressure-jet rotor had emerged in the USA. Whereas the Rotodyne used tip burning, the hot-cycle rotor was powered by engine efflux ducted to the blade tips. Built by Hughes, the XV-9A hot-cycle research helicopter flew in November 1964, the rotor driven by the exhaust from two GE YT64 gas generators passing though steel ducts in the blades to cascade vanes at the tips. 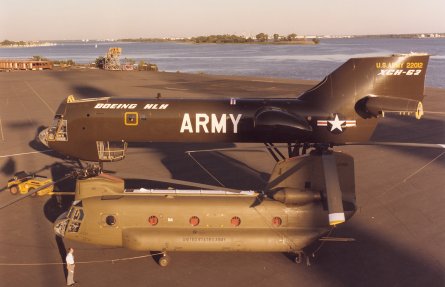 The concept worked, but the XV-9 was noisy, thirsty and the 700°C exhaust gas required the blades to be cooled. Hughes looked at using turbofans instead of gas generators, and tested a “warm cycle” rotor in the windtunnel. The improvements were judged to be insufficient – but that was not to be the end of the story.

In the 1960s, Hughes also looked at using hot-cycle reaction drive to power a stoppable rotor/wing. The Y-shaped rotor/wing would rotate to generate lift like a helicopter, then slow and stop to become a swept wing for high-speed forward flight. Windtunnel and whirlstand testing revealed vibration problems, and the idea was dropped – to be revived in 1990 for NASA studies of 350kt-plus rotorcraft.

After the abortive Sikorsky X-Wing stopped-rotor project of the early 1980s, Boeing – successor to Hughes and McDonnell – began work on the Canard Rotor/Wing (CRW). This differs from previous stopped-rotor concepts in unloading the reaction-drive rotor during the transition between helicopter and aeroplane mode. The X-50A Dragonfly unmanned CRW demonstrator has yet to prove the concept, the first vehicle having crashed, but Boeing has just resumed flight testing. The story is not over yet.