Announced on 30 June, the five-year acquisition will bring the total number of USN E-2Ds on order to 50, out of a total requirement for 75 aircraft.

Thirteen production aircraft have been delivered to date, and initial operating capability is expected late in 2014/early 2015.

According to Naval Air Systems Command, which is the contracting body for the acquisition, the multi-year contract is expected to save USN some $369 million and covers the full-rate production of lots two through six during fiscal years 2014 to 2018. 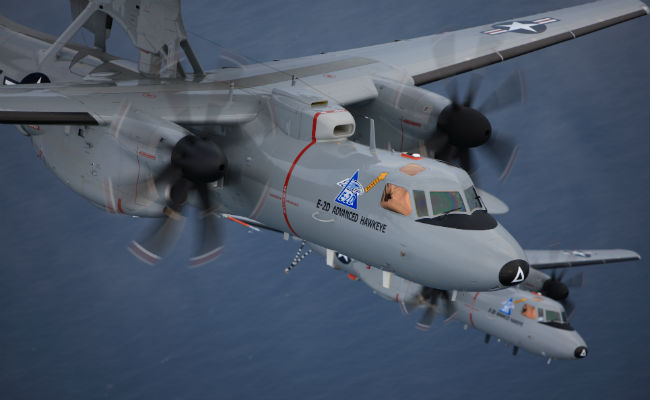 The E-2D is a carrier-based AEW&C platform, which includes a rotating rotodome offering 360˚ surveillance and a four vertical stabiliser tail configuration.

“A multiyear procurement of these additional E-2Ds will take advantage of efficient, stable production lines at both Northrop Grumman and our suppliers, and will generate significant cost savings for taxpayers and the navy,” Bart LaGrone, vice-president of E-2/C-2 programmes at Northrop Grumman, says in a statement.

LaGrone adds that since the first delivery in 2007, every E-2D has been delivered on schedule and on budget. “It is this kind of proven programme performance and partnership with our customer that results in a multiyear contract – validating that the E-2D Advanced Hawkeye is the right system at the right time for the right cost,” he says.

The E-2D was derived from earlier models of the AEW&C platform, with the current model including a more powerful APY-9 radar, as well as new avionics and a glass cockpit.

The VAW-125 squadron, based out of Norfolk, Virginia, is the first established E-2D squadron. It unit assigned to Carrier Air Wing 1, and operates from the USSTheodore Roosevelt.