The US Air Force is not backing away from the ambitious sustained g requirement for its T-X next-generation trainer that has sidelined at least two proposed aircraft types and driven competitors toward clean-sheet designs.

When the competition to replace the 55-year-old Northrop T-38 Talon got underway in 2010, pundits predicted the air force would favour price over performance, and vendors rushed to offer ready-made examples like the Alenia Aermacchi M-346 (offered as the T-100), BAE Systems Hawk advanced jet trainer and Lockheed Martin/Korea Aerospace Industries T-50 Golden Eagle.

However, the service's initial set of requirements – posted in March – narrowed the field and caused the primes to reassess their initial offers, with General Dynamics parting ways with Alenia Aermacchi and Northrop reconsidering its Hawk offer in favour of a clean-sheet design. 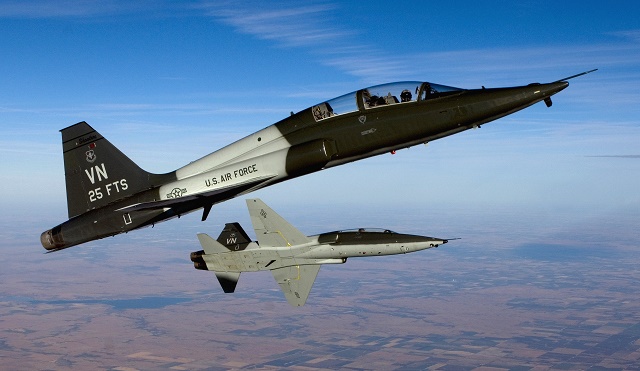 In a 10 July statement, the Air Education and Training Command (AETC) confirmed that the minimum T-X sustained g requirement of 6.5g and objective of 7.5g remains unchanged from the key performance parameter published in March, even though it would exclude a number of viable trainer options from the competition.

The requirement sets a high bar for manoeuvrability, requiring the T-X to sustain that load at a pressure altitude of 15,000ft for at least 140˚ of a full turn with minimal loss of energy and altitude.

“Initiated at or above 15,000ft pressure altitude, at or below Mach 0.9, and at or above 80% fuel weight, the aircraft’s flight path angle during this manoeuvre can be no lower than 15˚ nose low while losing no more than 2,000ft of vertical altitude and 10% of the initial airspeed,” the AETC says.

This pushes out the T-100, which its Italian manufacturer says can sustain 5.3g at 15,000ft. The Hawk is also out of the race. "If you score us on how much sustained g you can pull, we'll lose every time,” one BAE business development manager told Flightglobal back in 2011.

Boeing and Saab, Northrop Grumman and Lockheed have each said they are working on clean-sheet designs, although the nimble Lockheed-KAI T-50 still appears to be a viable contender. Textron AirLand has also been considering a trainer derivative of its Scorpion jet.

The clarification from the AETC comes after a recent pre-solicitation conference in May attended by Alenia Aermacchi, Boeing, Lockheed, Northrop, Raytheon and Textron. 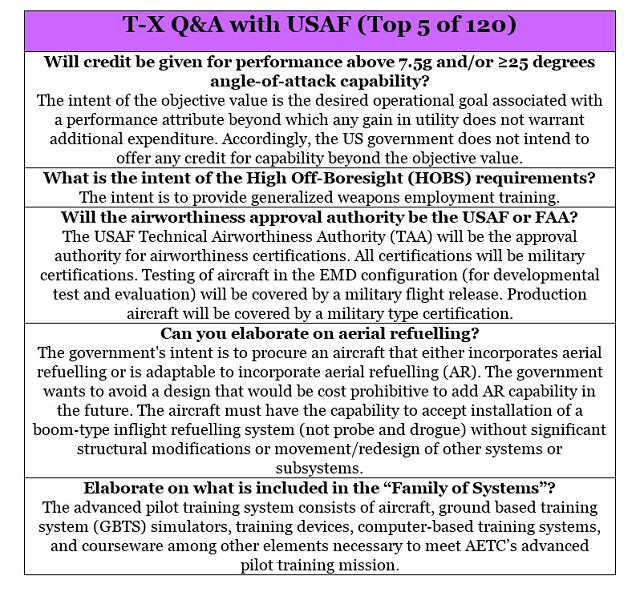 “It is imperative that we procure an advanced trainer capable of enabling our future pilots to safely and effectively transition into high-performance fighter aircraft,” says Brig Gen Andrew Croft, the AETC's director of plans, programmes and requirements.

“The T-X threshold and objective requirements will enable the T-X to close the ever-widening gap between T-38 performance and that of aircraft such as the [Lockheed] F-22 and F-35.”

In a 10 July notice to industry accompanying a statement from the AETC, the programme office said no extra credit would be applied to competitors that exceed the sustained-g objective. The service does not plan to hold a fly-off, but could request flight demonstrations from the competitors. 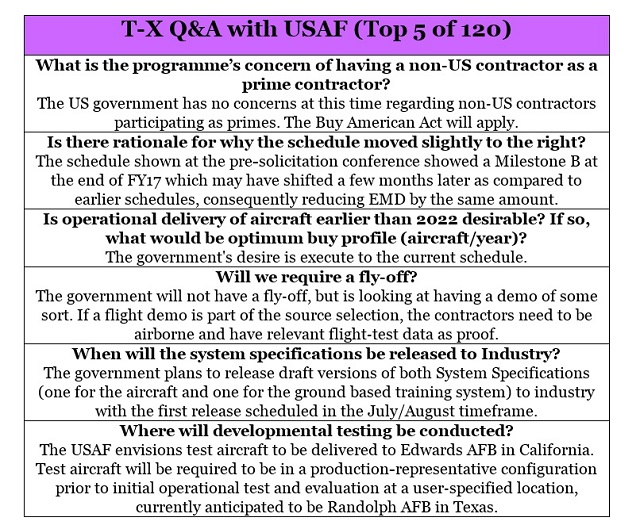 The AETC says it needs to start replacing the Talon for advanced pilot training in the early 2020s, when the aircraft is expected to age out. The programme office says it expects to begin releasing draft T-X system specifications over the coming months, ahead of a draft request for proposals (RFP) in 2016.

A full RFP release is expected in 2017, which will lead into a one-year competitive downselect and a four-year development phase, for initial operational capability in 2023. The start of development could shift by several months, however, because of the extra time taken to engage with industry about the requirements, the air force says.

According to the draft programme schedule released in May, six aircraft and three ground-based training systems will be built through the development phase and 346 aircraft will be delivered in the production phase through 2029. 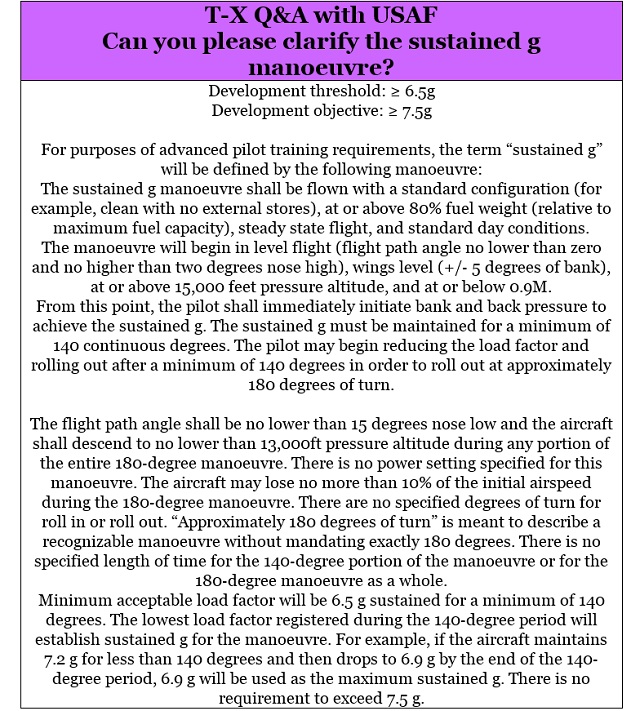