Times are good at Washington Dulles International airport where a new forecast sees costs falling faster than expected, begetting new air service at the once growth-challenged gateway to the US capital.

Cost per enplanement, or the amount it costs an airline to carry a passenger from an airport, fell below $20 to $17 for the first time since 2010 last year, says Jack Potter, chief executive of Dulles operator the Metropolitan Washington Airports Authority (MWAA), at a board meeting today.

Costs are expected to fall further to $16.89 per passenger this year, his presentation shows.

By comparison, airlines paid an average of $13.44 per passenger at Ronald Reagan Washington National airport in 2017, which has benefitted from rapid growth in recent years.

"We welcome this new service," says Jerome Davis, chief revenue officer of MWAA, at the board meeting.

Lowering costs at Washington Dulles has long been a goal for the operator. Costs jumped to $20.25 per passenger in 2011 from $17.16 the year before, as MWAA began paying debt service on the newly opened AeroTrain connecting the airport's terminal and concourses and United cut capacity at its hub.

That debt burden, and high costs, made it “more difficult to do business here compared to other hubs”, then United chief executive Jeff Smisek told FlightGlobal in 2013 when asked about expanding the Star Alliance carrier's hub at Dulles.

MWAA and the Commonwealth of Virginia have taken a proactive approach to lowering costs at Dulles. Virginia budgeted $50 million to lower passenger expenses in 2015, and the operator reached an agreement with airlines in 2014 that allowed it to use revenues from Washington National to defray debt at its larger sibling.

The efforts are working. Airlines have seen average costs fall every year since peaking at $26.55 per passenger in 2014, Potter's presentation shows. Traffic rebounded to 22.7 million last year from 21.6 million in 2014. 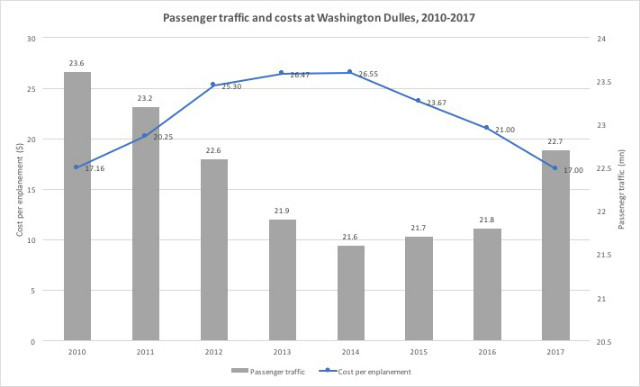 United, which carried about two-thirds of passengers at Dulles in 2017, has changed its tune.

"Dulles is a great hub," said Andrew Nocella, chief commercial officer of the Chicago-based carrier, in April. "We continue to evaluate how to take advantage of [unused gate space]… I think there's opportunity to grow that in the future."

Earlier in May, United cited a "more optimal" connecting schedule at Dulles in its decision to move Chattanooga, Ithaca and Wilkes-Barre/Scranton flights there from its Newark Liberty hub.

The airline has grown capacity at the airport annually since seats bottomed out in 2015, schedule data shows. It is scheduled to operate 9.06 million seats from Dulles this year, up 12.7% from its trough three years earlier.

United declines to comment on the latest cost projections at Dulles.