Airbus Defence & Space appears to have emerged as the sole bidder for a global tender put out by New Delhi's Defence Research and Development Organisation (DRDO) for an "AWACS India" programme. The tender – for six airborne early warning and control (AEW&C) system aircraft – was issued in March 2014.

Airbus submitted its proposal last October, an Airbus official confirms. Other sources indicate that the European company is the lone party to have responded to a request for proposals linked to the project.

Commercial bids have yet to be opened for the requirement, which is for an initial batch of two aircraft, followed by four more. Options to increase this fleet size to 10 could be exercised at a later stage. 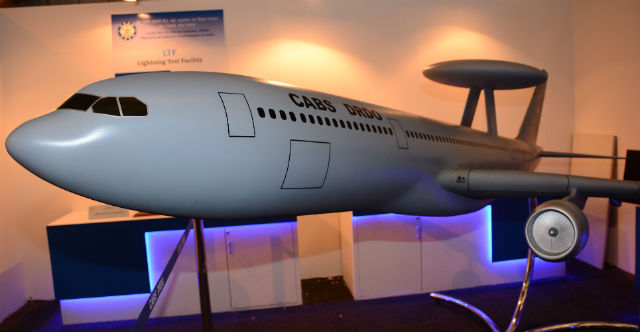 On display on the DRDO stand at the Aero India show in Bengaluru on 18 February was a model of an Airbus A330 fitted with a radome. Officials at the display did not provide any further information about the programme.

Airbus would have to integrate the mission systems on the aircraft and gain certification that it is safe to fly with the radome. The airframer says it has been busy replying to Indian queries on technical aspects of the programme. “It is not an easy programme, and we have to do it with fully civilian certification, as requested by DRDO,” the company source says.

If a contract is signed for the A330 as the platform for the Indian AWACS effort, it will be the first instance of the type being used in the AEW&C role. Airbus Defence & Space has also been involved in jointly reviewing New Delhi's indigenously developed AEW&C system with India's Centre for Airborne Systems, with the first Embraer EMB-145-based example likely to secure initial operational clearance later this year.

Meanwhile, Airbus is waiting for a decision on India's planned contract for its A330 multirole tanker transport, having agreed to further extend the validity of its bid until 1 July. New Delhi runs the risk of encountering a cost escalation if further delays are encountered beyond this date.

It has been more than three years since the A330 was first chosen to meet the Indian air force's tanker requirements, with a planned acquisition of six of the type.