Airbus is aiming to achieve at least the same number of commercial aircraft deliveries this year as the 566 it managed over the course of 2020.

Its commercial aircraft operation generated a full-year earnings loss of €1.33 billion ($1.6 billion), after a 37% fall in revenues to €34.2 billion, contrasting with a previous profit of nearly €1.8 billion.

Airbus says it is aiming for the “same number” of commercial aircraft deliveries in 2021 as it achieved last year. 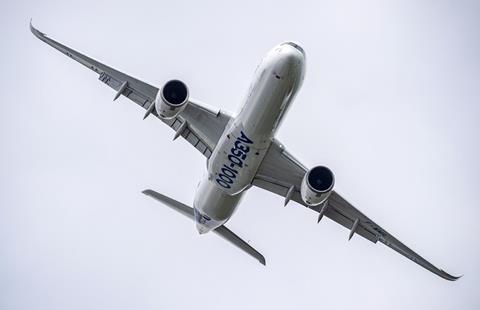 The group’s overall consolidated earnings amounted to a loss of €510 million after it took into account charges of €2.2 billion.

It has also taken a €480 million charge relating to pre-delivery payment mismatch and balance-sheet revaluations, plus €149 million in other costs.

The company says the weaker commercial aircraft performance was supported by a “strong contribution” from its defence and helicopter businesses.

Airbus chief Guillaume Faury says the results “demonstrate the resilience” of the manufacturer during the “most challenging crisis” to strike the aerospace industry, but adds that “many uncertainties remain” for the current year.

The company says its priorities for this year include managing its deliveries and backlog, including defence contracts, and finalising the implementation of its restructuring.

It also intends to “prepare the industrial eco-system” for market recovery and focus on the “transformation” of its industrial value-chain for commercial aircraft.

Full-year free cash-flow for 2020 – before mergers, acquisitions and customer financing – was a negative €6.9 billion. Airbus’s net cash position at the year-end stood at €4.3 billion, with a total liquidity of €33.6 billion.