Airbus board approves A350 freighter development

Airbus has secured board approval to develop a freighter version of the A350, as the airframer prepares for a commercial aircraft production ramp-up in the second half.

Chief executive Guillaume Faury says the company is “enhancing our product line” with the A350 freighter derivative following the approval.

“[We are] responding to customer feedback for increased competition and efficiency in this market segment,” he says.

Faury disclosed the decision as he described Airbus’s first-half performance as “strong” and the manufacturer raised its forecast, expecting to deliver 600 commercial aircraft this year. 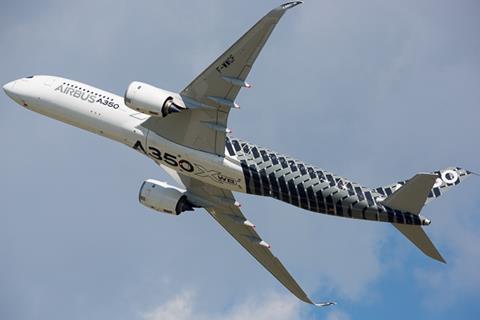 Over the first six months to 30 June the company’s commercial aircraft division delivered 297 jets and generated an adjusted EBIT of €2.29 billion compared with the previous loss of €1.3 billion.

Commercial aircraft revenues were up 42% to €17.8 billion.

“These half-year results reflect the commercial aircraft deliveries, our focus on cost containment and competitiveness, and the good performance in [the helicopters and defence activities],” says Faury.

He says the company is working to “secure” its planned ramp-up of A320neo-family production. The company disclosed in May that it was aiming to raise monthly output of the family to 45 by the end of this year, and gradually increase this level to 64 within two years.