JAL in consortium to study drone deliveries in Tokyo

Japan Airlines has joined a consortium of four other Japanese companies in a feasibility study on drone deliveries in Metropolitan Tokyo.

The two-year project will see the group study the feasibility of drone deliveries in the medical, food, as well as security sectors. 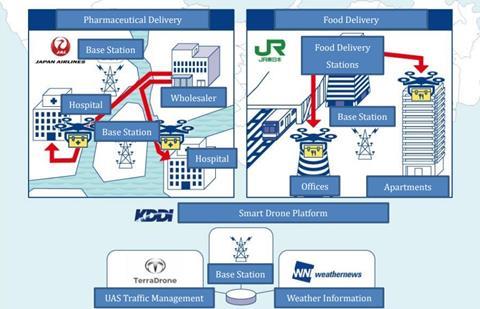 Japan Airlines has joined a consortium of four other Japanese companies in a feasibility study on drone deliveries in Metropolitan Tokyo.

One demonstration will involve drones delivery medical supplies from a pharmaceutical wholesaler to a hospital during an emergency.

There will also be demonstrations on food delivery from restaurants to offices in close proximity, as well as the use of drones for patrol purposes.

By fiscal 2021, which begins 1 April next year, the consortium will “verify operational issues and review the ability to generate a profitable business through these demonstrations”.

The project comes as the logistics industry is undergoing changes in light of the coronavirus outbreak, says JAL.

“In recent years, the development of technology for drone-led services and changes in the environment has steadily progressed to a level to realise new business opportunities,” it states, adding that the “use of drones may help realise automatic, contactless delivery services” in future.

It also comes as the Japanese government is working towards establishing a drone-led delivery business model within the next two years.

JAL adds that the Tokyo metropolitan government will support the project financially.

This marks JAL’s latest foray into drone technology development. In January, JAL signed a cooperation agreement with the Japanese city of Yabu to test UAV flights to transport medical supplies.

Separately, JAL announced that it will roll out a drone operator training programme in October to train UAV pilots. Known as the JAL Air Mobility Operation Academy, the carrier says the programme, the first in Japan, will ”offer the same flight knowledge taught to actual pilots of a commercial airline”.