Leasing firm World Star Aviation is to take up to 20 Boeing 737-800 converted freighters, which will be modified by Israel Aerospace Industries.

The jets will be converted into cargo configuration at the Chinese-based facility Bedek Lingyun Aircraft Maintenance Engineering – known as Belinco – located in Yichang.

IAI says the agreement covers 10 firm aircraft plus options for another 10.

World Star Aviation, which has a presence in the USA and UK, was established in 2003 by former executives of GECAS and Triton Aviation Services.

The lessor says it specialises in mid-life aircraft and engine leasing, primarily concentrating on single-aisle Airbus and Boeing types. 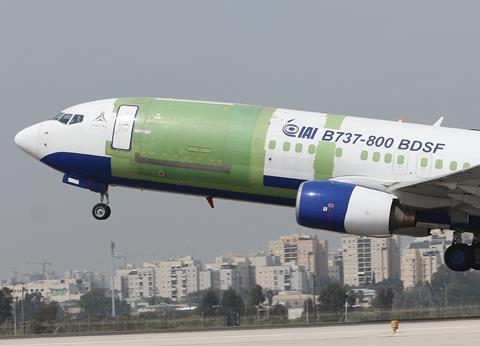 IAI will convert the single-aisle jets for World Star

“We see this agreement as a strategic next step in the expansion of our global freighter fleet as part of our partnership with Oaktree Capital Management,” says World Star partner Yoram Allalouf.

“We see the 737-800 as the backbone of the short-haul and feeder freight services.”

Allalouf adds that the narrowbody freighter fleet expansion “complements” the development of its widebody freight strategy.

“I am certain we will see many more similar agreements with World Star Aviation in the coming years,” he adds.