Russian Helicopters head Andrey Boginsky is to take over as chief of airframer Irkut – producer of the MC-21 twinjet – after the company’s board agreed to end the tenure of Ravil Khakimov after two-and-a-half years.

At a 30 November board meeting Boginsky was approved to serve a three-year term running to the end of November 2024.

He will take over Irkut at a critical point in its development, with the MC-21 programme preparing to receive Russian certification, production of the type set to ramp up, and entry into service due in the next few months. 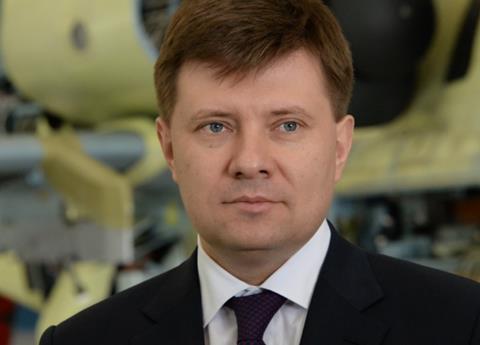 Boginsky will also take on the post of deputy general director for civil aviation for United Aircraft, a position created to help the company handle the multiple tasks in aircraft development it faces over the next few years – including development of the ‘SSJ-New’ version of the Sukhoi Superjet 100 and the Ilyushin Il-114-300 turboprop.

United Aircraft credits Khakimov, appointed in April 2019, with ensuring the smooth progress of MC-21 certification testing and expanding the Superjet’s prospects through launch of the upgraded version. The company says he will “switch to other work”, without elaborating.

It says Boginsky, as the head of Russian Helicopters, successfully managed one of the largest aviation production companies in the country – achieving strong civil sales over the period from 2016-20.

But he also served as deputy industry and trade minister and, in this role, supported the implementation of the MC-21 and Superjet programmes.

United Aircraft general director Yuri Slyusar says Boginsky’s appointment gives the company an “experienced and professional manager” and that his skill will be in “great demand” during the implementation of its main civil aircraft programmes. Its business strategy foresees 50% of revenues being derived from civil business by 2030.