Irkut has sent the first Russian-powered MC-21 for painting at the Spektr-Avia facility located within Ulyanovsk’s Vostochny airport.

It carried out its first flight in December last year and Irkut intends to exhibit the aircraft at the upcoming MAKS Moscow air show in July.

The jet arrived at Ulyanovsk on 22 June, operated by two test pilots with a flight-test engineer on board, says Irkut.

After painting is complete the aircraft will be flown to Zhukovsky’s Ramenskoye airfield to continue tests.

Four other MC-21s in the test fleet are all -300 variants powered by Pratt & Whitney PW1400G engines. 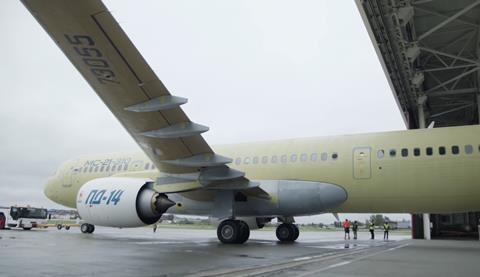