The Serious Fraud Office states that it is investigating the manufacturer over “suspected bribery and corruption” in connection with orders or agreements with Garuda.

It has not elaborated on the probe, pointing out that the inquiry remains “live”.

Orders from Garuda Indonesia for Airbus A330s and A320s had been among agreements probed during a long-running investigation into allegations of failure to prevent bribery focused on Airbus, which resulted in a deferred prosecution arrangement at the beginning of this year. 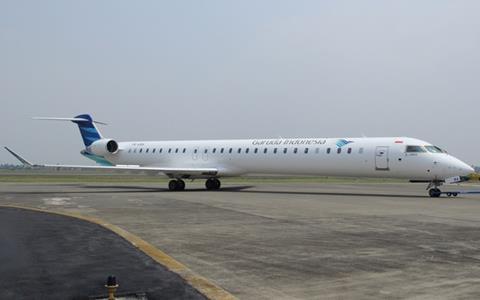 Indonesia’s Corruption Eradication Commission stated earlier this year that former Garuda chief Emirsyah Satar was convicted of corruption and money laundering, sentenced to a term of imprisonment and fined.

Satar was convicted of having received bribe payments from another individual for support in securing contracts for Bombardier, Airbus, ATR and Rolls-Royce.

He had been heading the carrier at the time of its order for 18 CRJ1000s in 2012. The airline remains an operator of the type.

”No charges have been laid against Bombardier or its employees in connection with this matter,” the Canadian airframer states.

“In accordance with best practices when such allegations come to our attention, we have launched an internal review conducted by external counsel and we are co-operating with the investigation opened by the UK Serious Fraud Office, which has contacted Bombardier further to the Indonesian judgements.”

Earlier this year Mitsubishi Heavy Industries completed its acquisition of the CRJ programme from Bombardier.