Three BelugaXLs, based on the A330, have been built, the most recent introduced in October 2020. Another three will be manufactured, the last two of which will have 180min ETOPS approval, according to BelugaXL chief engineer Pascal Vialleton.

Vialleton disclosed the ETOPS plan during a Royal Aeronautical Society event on 4 February.

He says Airbus wants to have the final two aircraft, due to arrive in 2022 and 2023, to have the flexibility to conduct transatlantic flights, pointing to the possibility of satellite transport to launch stations in North America.

This capacity strategy rather than the -600ST’s age, says Vialleton, is the main reason for the fleet renewal: “We still can use the -600ST. But what to do with it?”

He says Airbus has initiated a project to propose new services for the -600ST, for which 180min ETOPS was obtained in 2010.

Airbus had previously signalled that it was not seeking ETOPS authorisation because the aircraft’s relatively short European logistics hops did not warrant it, and this would generate developmental cost savings.

But the XL has substantially greater range than the -600ST, and having ETOPS capability would enable the larger aircraft to serve as a support for future -600ST services.

“This is why we’re developing ETOPS for the XL,” says Vialleton.

Airbus has signalled that it does not intend the XL to replace seaborne transport of aircraft sections between European manufacturing plants and final assembly lines in the USA and China. ”Sea transport will continue to be the baseline of Airbus’s oversize transport strategy [to these lines],” says the airframer. 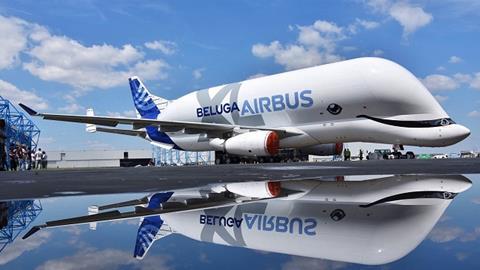 Designated the A330-700L, the BelugaXL was developed to support the A350 programme

Vialleton hints that Airbus has also considered other options for the -600ST fleet, pointing out that it can be used to “carry whatever is big and needs to be transported” – although unlike aircraft such as the Antonov An-124, it cannot unload at ground level, so a mobile platform stored in the aircraft could be necessary for such roles.

Airbus is looking to improve the XL’s capabilities following its entry into service in January last year. Its original flight-test aircraft will become part of the operational XL fleet, says Vialleton, but is likely to be the last to be introduced, joining once its on-board test instrumentation has been removed.

The airframer has been conducting a series of flight tests, about 60h so far, to obtain approval for Cat III autoland on the aircraft. This requires an extensive effort to test autoland under various conditions, including crosswind tests performed at Newcastle in December last year.

Vialleton says Airbus needs to justify design service targets of 33,000 cycles, pointing out that it had achieved only 3,200h at the time of type certification. “So there’s quite some activity remaining on the stress side,” he says.

The air-conditioning system had to be re-examined because XL pilots were experiencing a cockpit temperature differential in winter. Vialleton says this was “really not comfortable”, but the review of the ventilation meant changing the airflow in the cockpit, requiring additional flight tests to ensure no effect on smoke detection in areas such as the avionics bay.

Airbus has also addressed a problem of premature wearing on doors, and certified operation of the main forward loading door with up to 30kt crosswind and a 40kt tailwind, which Vialleton describes as “quite impressive”. 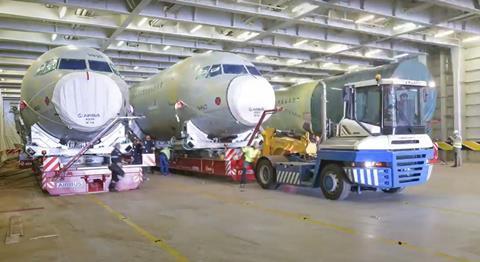 Sea transport, seen here with the loading of the vessel Mobile Express, will not be replaced by BelugaXL flights