Airbus has conducted an A321XLR test-flight with a duration of more than 13h as part of its development programme for the long-range twinjet.

The airframe departed Toulouse shortly after 08:00 on 13 December.

It flew a wide circuit initially heading towards the UK and Ireland, before crossing to Norway and then turning south past Oslo, Berlin, Prague and Rome.

After nearing Sicily, then passing over Sardinia, the aircraft returned to Toulouse to land at about 21:20 – after a flight of 13h 15min, according to Airbus.

As part of the flight, the aircraft traced a path which spelled out ‘XLR’ over the Bay of Biscay.

It is developing the A321XLR – the latest variant of the A321neo – to enable carriers to open new long-haul routes on which demand might initially be limited.

Airbus is aiming to have the aircraft ready for entry into service in 2024. 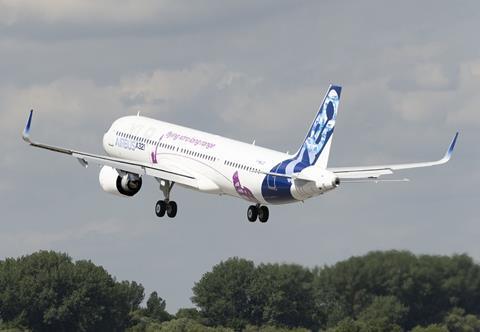 Airbus used its initial A321XLR prototype, seen here on its maiden flight, for the test