Airbus has revealed that an undisclosed customer has ordered 20 A220-300s, while lessor Avolon has signed for eight A320neo-family jets.

The agreements in March bring the airframer’s gross order figure to 39 aircraft for the first quarter of this year.

But cancellation of eight single-aisle jets – five A320neos and three A321neos – took backlog reductions to a round 100.

This left Airbus in negative net orders with a deficit of 61 at the end of the first three months of 2021.

Airbus delivered 72 aircraft in March including 64 single-aisle models and eight A350s – among them its first -1000 of the year to Cathay Pacific. 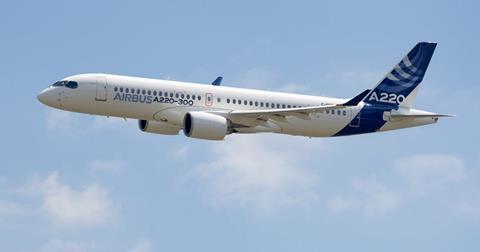