Alaska Air Group is to co-operate with future propulsion specialist ZeroAvia in a project to convert a De Havilland DHC-8-400 turboprop to be powered by a hydrogen-electric engine.

Under the collaboration agreement, the aircraft – which was operating for Alaska’s Horizon Air regional carrier – will be fitted with ZeroAvia’s proposed model ZA2000 powertrain.

Alaska Air Group is also placing options for up to 50 kits to convert regional aircraft to hydrogen-electric power, using the ZeroAvia system.

This transformation would begin with the DHC-8-400 fleet.

Alaska Air Group will become one of the “top investors” in ZeroAvia, says the technology firm, although specific figures have not been disclosed.

ZeroAvia’s development plan envisions a hydrogen-electric powertrain capable of flying a 76-seat aircraft across a range of 500nm. 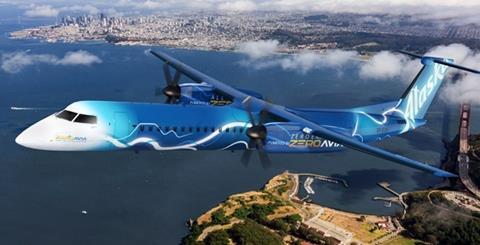 Alaska Air Group will assist the engineering teams to scale up the current ZeroAvia powertrain – which has been tested at 600kW – to a system able to deliver between 2MW and 5MW.

ZeroAvia estimates that the DHC-8-400 programme requires a 3MW application.

“[We] will also work closely with aircraft regulators during this project to ensure the aircraft meets both safety and operational requirements,” says ZeroAvia, adding that it will establish a presence in the Seattle area to support the development.

ZeroAvia intends its 600kW powertrain for 19-seat aircraft – it is to test the system on Dornier 228s – and believes the larger 2MW prototype will be ready for demonstration in 2022.

Alaska Air Group, which recently unveiled an investment arm for net-zero technology, says it is “committed to creating a sustainable future for aviation”, with a net-zero target of 2040, adding that it is “honoured” to support the ZeroAvia initiative.