Normalisation of diplomatic relations between Bahrain and Israel has led to a new maintenance agreement under which Gulf Air aircraft will undergo line maintenance from Israel Aerospace Industries.

This will include pre- and post-flight services, daily maintenance, and technical support.

IAI already offers line maintenance to around three-quarters of airlines serving the Tel Aviv base, it states. 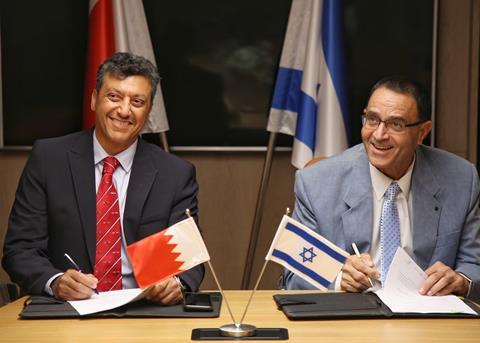 “We look forward to benefiting from their expertise and the wide technical knowledge they are well-known for in the industry,” says Gulf Air acting chief Capt Waleed Abdulhameed Al Alawi.

Bahraini and Israeli government representatives reached an air services pact in October allowing carriers from each country to operate up to 14 weekly services on the Manama-Tel Aviv route.

“[We see] the normalisation between both countries as an opportunity for business and technology partnerships and this agreement is the first of many more to come,” says IAI chief executive Boaz Levy.