Rolls-Royce’s chief technology officer, Paul Stein, believes that revenue passenger flights with electric aircraft are possible by 2029, but insists that substantial advances in sustainable aviation fuel production must accompany the drive towards such technology.

While hybrid-electric aircraft could potentially be in service by the end of the decade, Stein stresses that two-thirds of all jet fuel is used on sectors longer than 1,000nm – a threshold at the far fringes of even the most optimistic forecasts for early electric aircraft range.

Speaking to FlightGlobal during the A4E aviation summit in Brussels, Stein said the aviation industry was looking seriously at strategies to achieve net-zero carbon by 2050 rather than simply meeting previous decarbonisation targets.

“We’re sticking to our promise but exploring how to achieve a much higher ambition,” he says, which means going beyond current programmes such as the Rolls-Royce UltraFan engine.

Rolls-Royce’s joint E-Fan X project with Airbus – which will use a hybrid motor to help power a regional jet – is intended to provide an evolution path towards electric “city hopper” aircraft and, while the technology is still new, Stein believes it is “one of the shortest routes to market” and transporting fare-paying passengers by 2029 is “entirely feasible”.

E-Fan X is “streets ahead of anything else we’ve seen in the world”, claims Stein, but he stresses: “We won’t be battery-powering A320s in the near future.”

This means that a corresponding effort must be made to drive sustainable aviation fuel technology, and create the economic and regulatory conditions for the fuel industry to invest, because, says Stein, some 500Mt of such fuel will be needed by 2050 to support air transport, and long-haul flight in particular. 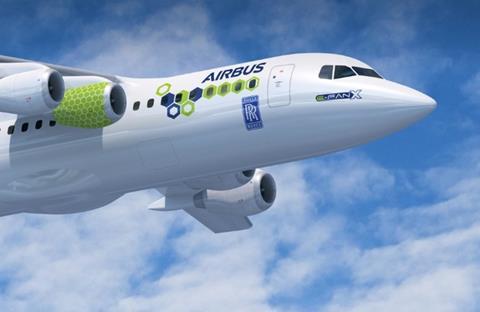 “Sustainable fuel is a huge challenge for our sister industry,” says Stein, pointing out that aviation needs “lean heavily” on the energy sector’s finding “cleverer and cleverer ways” to produce the quantities required.

“We don’t, for one second, underestimate the challenge ahead of them in the scale-up exercise, nor some of the huge engineering undertakings in doing things like carbon dioxide capture from the atmosphere.”

Stein says that – despite adverse publicity, such as the ‘flight-shaming’ movement in Scandinavia – the aviation industry is decreasing net carbon dioxide at the “same rate” as other parts of the economy. As a result, he says, home heating is potentially going to become a “bigger problem” than aviation.

Airbus chief commercial officer Christian Scherer, speaking at the summit, said the industry could not simply be satisfied with its fuel-saving technological achievements, and needed to “embrace the challenge” of tackling more daunting problems.

“How many times do we need to show aircraft can fly on sustainable biofuels?” he says. “We’ve done what we can with the current level of technology.

“We can sit here and say we’ve been great corporate citizens, and socially responsible, or we can face the challenge and invest in new technology.”

Scherer says electric aircraft are “not far away”, suggesting the “next decade” for a timeline, adding: “At Airbus we certainly view the challenge as an opportunity as opposed to a constraint. That’s where our R&D money needs to go.”