Ekaterinburg-based UZGA showed off the proposal to aviation industry representatives, including regional carriers, on 22 December.

Rosaviatsia says it has started initial certification work on the basic design of the aircraft, drawing up a framework for approval.

“The aircraft is [intended] to solve the problem of developing regional and local air traffic, including climatically difficult remote regions [such as] the Arctic territory,” it adds.

It states that the TVRS-44 will be manufactured with “maximum use” of domestically-produced components. 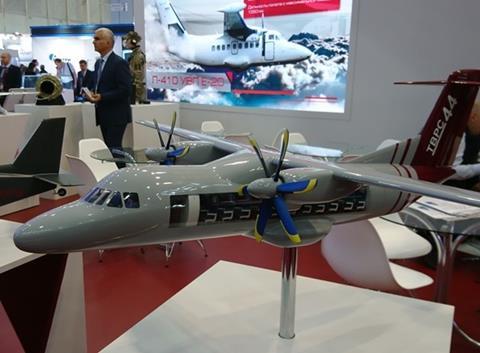 Displayed an an earlier show, a model of the TVRS-44 turboprop

Rosaviatsia says it wants to facilitate a “mutually-supportive dialogue” between aircraft designers and future operators, and familiarise them with the technical and operational characteristics of aircraft under development

It indicates the TVRS-44 is likely to be among regional aviation projects due to be promoted at a 10 February national exhibition of civil aviation infrastructure in Moscow.

This event will enable Russian regional authorities, as well as interested airlines and leasing companies, to obtain further details of domestic aircraft programmes in progress.