Flightglobal.com will bring you all the news and images of the first A380 to enter service as Airbus hands the aircraft over to Singapore Airlines in Toulouse on Monday 15 October.

The Airbus A380 is the largest jet airliner ever built and is the world’s first double-deck passenger aircraft. First flight took place from Toulouse, France on 27 April 2005 and led to a flight test programme involving five Airbus A380s. Service entry with launch customer Singapore Airlines is set for 25th October 2007. Total orders for the Airbus A380 stand at 159, from 16 customers.Two versions of the Airbus A380 are currently offered, the 550-seat passenger version and a freighter, the Airbus A380F. Stretched versions of both are planned.

As with all modern Airbus types, the Airbus A380 is controlled by a fully fly-by-wire flight control system. The upper fuselage of the aircraft is constructed with a new aluminium/glassfibre material, Glare, which is lighter than aluminium and more resistant to fatigue.

Conceived as a response to the Boeing 747, the Airbus A380 development programme was officially launched in June 1994, with development of the A380. Prior to that, the Airbus A380 had a complex gestation which at one time involved a joint study with Boeing on a 600-seat Very Large Commercial Transport. At one time, Airbus even considered a flying wing design for the A380, but this was abandoned for more traditional configurations which led eventually to the current oval double-deck section.

Development costs of the Airbus A380 were initially put at $8 billion but have risen to $12.2 billion.

The Airbus A380 made its first transatlantic flight to Medellin, Colombia, on 10 January 2006 to test engine performance at high airport altitude. Its first arrival in North America came on February 6, when an Airbus A380 landed in Iqaluit, Nunavut for cold-weather testing.

More Airbus A380 Images from Airspace 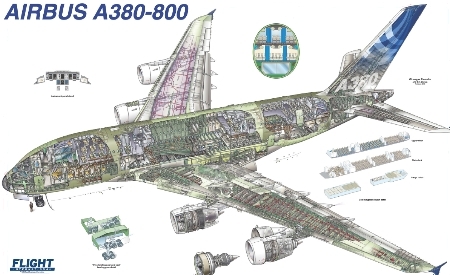 Comings and Goings: An A380 Update

Airbus A380 on the Flight Global Forums -

The latest discussions on Flightglobal’s Fourms:

Airbus A380 Aircraft Articles from around the web

More Airbus A380 News from around the web