​Airbus and Rolls unveil plan to restore A340-600 appeal

Airbus and Rolls-Royce aim to boost the market appeal of the A340-600 with reconfiguration and support initiatives that address operating costs.

The plan was unveiled in London on 4 December to an audience of over 100 delegates, who included bankers, appraisers, brokers, financiers and lessors.

"The meeting was to demonstrate Airbus, Rolls-Royce and CFM’s joint common commitment to the A340 programme," says Andreas Hermann, vice-president of freighters and A340 asset management at Airbus. "The key message is that it is not only one party, it’s all three parties who are very committed to the A340 programme."

Airbus acknowledges that the A340-600 burns 12% more fuel than the similarly sized Boeing 777-300ER, but it claims the four-engined aircraft can be competitive thanks to its lower ownership costs, which it claims averages $850,000 per month, and by tackling engine maintenance costs. Central to the latter is a pledge by R-R to bring maintenance costs for an A340’s four Trent 500s in line with those of a pair of General Electric GE90-115Bs, which power the 777-300ER.

A presentation given by Airbus at the conference included a slide about engine manufacturer support for the Trent 500 which stated: "Four engines for the price of two (four Trent 500 = two GE90-115)".

In response to cynicism that this pledge is nothing new, Hermann says: “That is where Rolls is very happy that they will be proven, not on their words, but on their actions.” 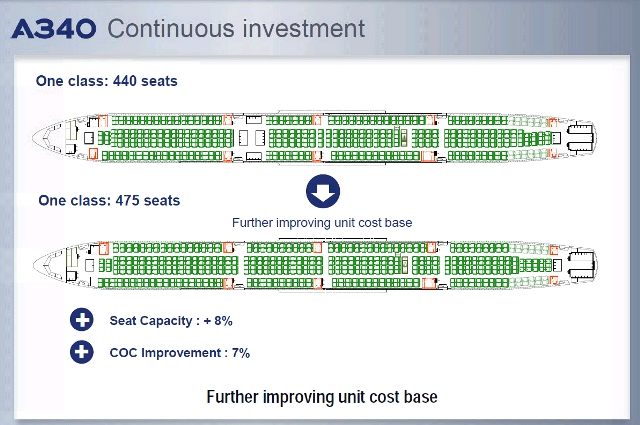 Airbus has also undertaken to certificate a high-density seating configuration for the A340-600 by raising the exit limit from the current 440 seats to 475. This configuration centres on a one-class all-economy layout with eight-abreast seating using 18in (46cm) wide seats at 31/32in pitch. "To go to 475 seats does not compromise the comfort standards," says Hermann.

However, Airbus is also offering an alternative two-class layout which uses narrower economy seats to permit nine-abreast seating. This has 18 business-class seats and 457 economy seats, the latter being 16.7in wide.

"The 475-seat certification requires about a 10-12 month lead time project and as it stands today we do not need to go through an evacuation test," says Hermann. "There is market interest and Airbus has committed to go ahead and do it. It is not subject to a customer commitment but we are having discussions and we’ll shortly have customers signing up for it."

Airbus says it is targeting operators of high-density Boeing 747-400s operated by charter operators with the 475-seat A340-600. It claims that the -600 burns 21% less fuel per trip and although the 747 has higher revenue-earning potential and lower ownership costs, a 475-seat A340 has an overall cost monthly advantage of $557,000.