​Airbus kicks off A350 route-proving trials

Airbus today began a three-week route-proving campaign using the fifth A350-900, marking the start of the final certification stage for the new twinjet.

A350 MSN5, which is equipped with a furnished cabin comprising 265 seats, will operate a “world tour” taking in 14 airports across the world and a route via the North Pole, says Airbus.

Tests will include performance from high-altitude airfields, automatic landings, as well as airport turnaround and handling, to prove the Rolls-Royce XWB-powered aircraft is ready for airline operations. 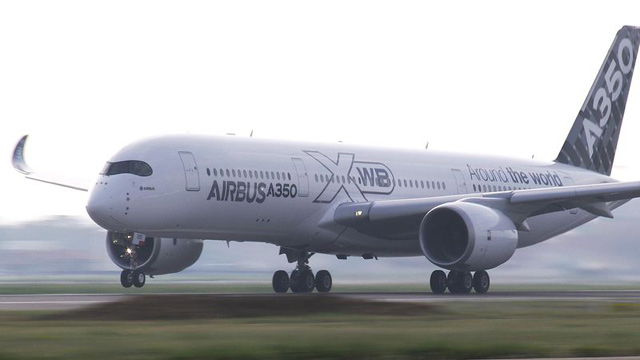 The programme is one of the final trials required for type certification, which the airframer expects during the third quarter, ahead of the first delivery to launch customer Qatar Airways towards the end of this year.

Route-proving flights will be operated by Airbus crews with participation from airworthiness-authority pilots from the European Aviation Safety Agency. Some flights will be flown with passengers on board, says Airbus.

The programme will comprise four trips, each of which begins in Toulouse. Trip one will operate to Iqaluit in Canada and then return via Frankfurt. Trip two will operate to Asia, with several Singapore-Hong-Kong sectors being flown, before returning to Toulouse. 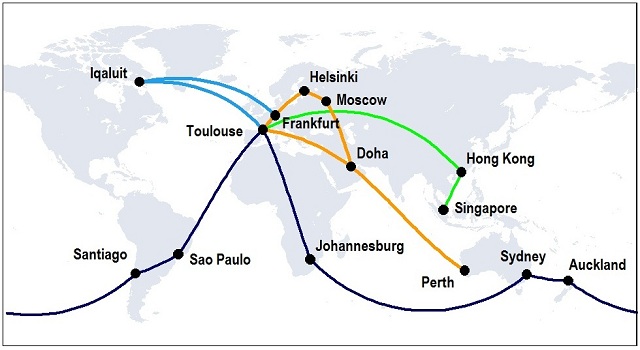 The third sortie will circumnavigate the globe east-bound from Toulouse via Johannesburg, Sydney, Auckland, Santiago de Chile and Sao Paulo. The fourth and final trip will operate to Perth via Doha, and return via Doha, Moscow and Helsinki. The Doha flights are expected to involve Qatar Airways.

Moscow's Sheremetyevo airport operator states that the A350 is due to arrive in the Russian capital on 11 August, coinciding with the anniversary of the airport's opening in 1959.

Five development aircraft are participating in the A350 flight-test campaign, which has accumulated over 540 flights and 2,250 flight hours to date.