Then there were six. Airbus’s programme to develop a new high-capacity transport, the BelugaXL, to support its logistics and production operation was originally intended to construct a fleet of five aircraft to replace, one for one, its A300-600STs.

But Airbus has opted to roll a sixth example off the line, to reinforce the airframer’s capabilities following its ramp-up of A350 assembly and the pressing need to raise A320neo-family output in response to demand.

“The decision followed an update, end of 2018, of an assessment that was carried out ahead of programme launch,” says Airbus. It says the BelugaXL fleet is an “integral part” of the airframer’s industrial system and a “key enabler” of its programme ramp-up. Airbus is aiming to deliver 880 aircraft this year and hike single-aisle production to 63 aircraft per month by 2021, rates which will place a heavy reliance on the transporter network. 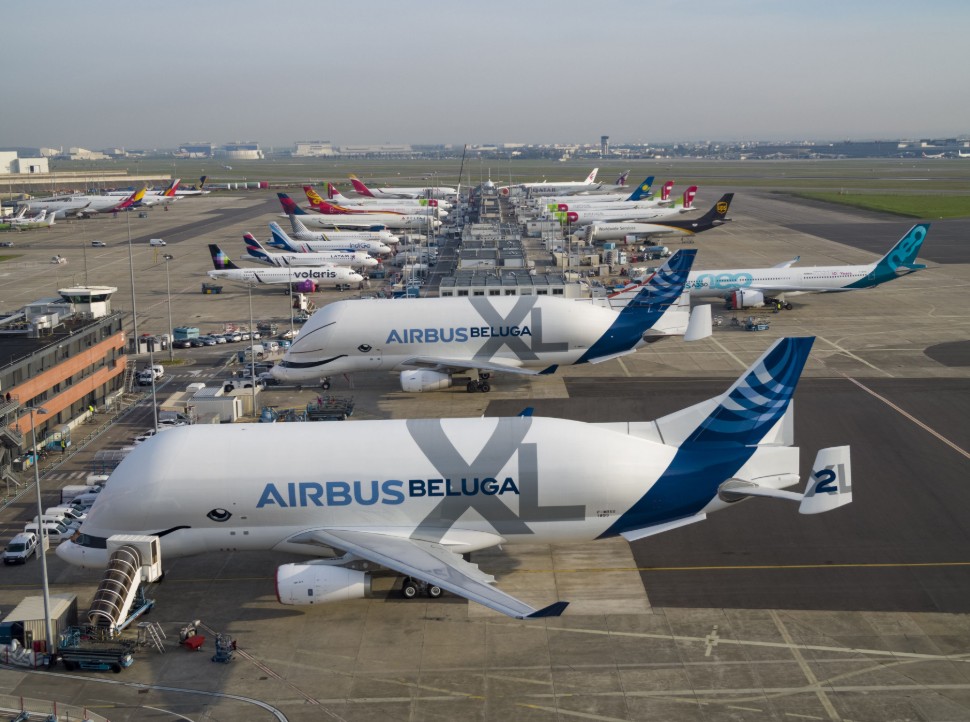 “By expanding the [BelugaXL] programme we protect future growth over the next 30 years and mitigate against industrial risks,” Airbus says. BelugaXL programme head Bertrand George says these risks include not only further increases in output but the possibility of technical problems grounding part of the fleet.

The expansion reflects the situation when the A300-600ST, the original Beluga, was developed. Four initial aircraft were certified by French authorities, one a year, from October 1995 to June 1998. But a fifth aircraft was subsequently certified, nearly three years later, in January 2001. Logistics division Airbus Transport International operates the fleet.

“I am sure we would not have coped without the fifth aircraft,” says Airbus Transport International head Philippe Sabo.

The A300-600ST operates under a restricted type certificate from the European Union Aviation Safety Agency, which allows aircraft that do not comply with all airworthiness requirements to be approved for operation through mitigating measures and limitations that ensure safety levels are maintained. While the BelugaXL – formally known as the A330-700L – is a specialised aircraft with a narrow production run, Airbus says there are “no regulatory restrictions” limiting the fleet to five, and it is free to expand to a sixth.

Airbus commenced flight-testing of the second aircraft on 15 April, flying the twinjet from Toulouse on a sortie lasting just over 5h 30min that took it over the Bay of Biscay, operating at cruise altitudes above 30,000ft. This aircraft, MSN1853, is set to be the first of the BelugaXL fleet to enter service. Airbus is intending to commence BelugaXL operations during the second half of this year, initially with two of the type.

Airbus says a third airframe is currently undergoing conversion in Toulouse. Assembly and integration work began at the end of 2018 and will continue until the fourth quarter of this year.

Airbus Transport International will take the third aircraft in 2020, which will increase its overall fleet – including the five A300-600STs – temporarily to eight, before the A300-600STs start to be phased out in 2021.

The aircraft, powered by Rolls-Royce Trent 700 engines, was developed primarily from the A330-200 freighter and heavily modified – not just with the cavernous main-deck fuselage and visor loading door, but also a lowered cockpit, larger vertical fin and secondary fins capping the horizontal stabiliser. Like the A330, the BelugaXL features composite structures including the fin and stabilisers, ventral strakes, leading edge and flight-control surfaces, winglets, belly fairing, nacelles and radome.

But the primary characteristic of the BelugaXL is its size. At 63.1m (207ft) the aircraft is some 12% longer than the A300-600ST and has a 51t payload. It features a 16m lower-deck aft compartment able to carry containers, pallets or bulk cargo.

Airbus first flew the BelugaXL on 19 July last year, the aircraft and its crew of five lifting off from runway 32L at Toulouse for an initial 4h 11min maiden sortie. It performed east-west circuits along the line of the Pyrenees mountain range, south of Toulouse, maintaining 8,000-12,000ft for much of the flight, with the landing-gear raised, before climbing to 32,000ft and operating at cruise altitude over the Mediterranean Sea. The flight “went very, very well,” chief test pilot Christophe Cal stated at the time.

Flight-testing of the first BelugaXL, MSN1824, has entered its “final stage” prior to certification, says Airbus. It had completed more than 140 test flights by mid-April, amounting to some 500h, and will be certified as a derivative using the A330-300 as a baseline, Airbus says.

The BelugaXL has been subject to equivalent EASA safety proposals such as that covering a ground control law, known as RSTAR, which acts on the rudder and is designed to improve stability in the yaw axis on the ground. Another refers to the outsize fuselage and the decision, similar to that for the A300-600ST, not to fit smoke-detection systems to the unpressurised main deck, as might normally be required for Class E cargo compartments.

“The risk of hazardous fire will be precluded in the [main deck] as no design features which could create a fire risk will be incorporated in this cargo compartment,” says EASA, adding that permitted cargo items will be of a nature that avoids the possibility of ignition.

The certification programme covers not only the specific flight performance requirements for the modified aircraft but aspects such as the reconfigured cockpit section which, unlike the A300-600ST, will feature a courier area behind the flightdeck with accommodation for four people – three seats fitted on the right-hand side, with another on the left. EASA has pointed out that the emergency exits for the A330-300 could not be retained and, as a result, the only exits available on the BelugaXL are the two cockpit sliding windows – requiring additional procedures to ensure they are latched before departure.

“Ground and flight tests have been carried out on schedule and according to plan,” says the airframer. “No major changes have been made.”

The A300-600ST was notably selected for certification flights using the satellite-augmentation system EGNOS – the European Geostationary Navigation Overlay Service – at Pau Pyrenees airport, about 90 miles (150km) west of Toulouse. Airbus Transport International had expressed interest owing to the absence of instrument landing systems at some of the airports used by the operator.

In parallel to the flight testing of the BelugaXL, Airbus has been carrying out integration checks with new facilities at its main supplier stations, as well as loading exercises to demonstrate that the aircraft can fulfil the central function for which it was designed – the ability to transport two A350 wings simultaneously. This capability was verified in February this year when a pair of A350 wings was shipped from the Bremen plant to Toulouse.

Testing has also been carried out at sites in Seville, in February this year, as well as the UK wing plant at Broughton. The arrival at Broughton was particularly crucial, because the runway conditions at the airport had been a specific influence on the design of the BelugaXL.

“Ground integration testing is ongoing,” says Airbus. “All loading and unloading tests performed up to now – in Bremen, Toulouse and Broughton – were successfully completed.”

Flight operations with the BelugaXL will differ from those previously employed on the A300-600ST fleet. Airbus transitioned to a two-person cockpit configuration on the A300-600ST in May 2018, and the company says that it is undergoing a “major change” by creating a loadmaster position to take over from duties previously performed by flight engineers. 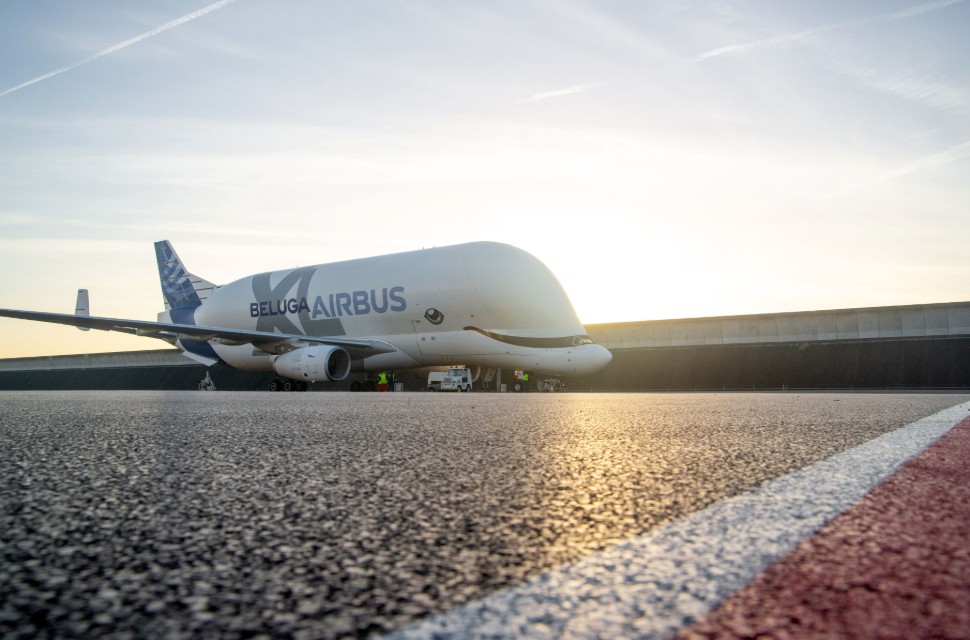 Loadmasters undergo a training scheme that includes at least 20 loading and unloading cycles, to prepare for the responsibility of opening the freight door and ensuring safe transition of fuselage sections and wings between the aircraft and ground receiving stations.

“Part of this [training] is theoretical, providing an insight into the aircraft's technology and familiarising loadmasters with weight and balance calculations,” says Airbus. “It also covers subjects such as human factors and handling dangerous goods.”

Airbus’s development of the BelugaXL will include a lighter-weight variant, with a maximum take-off weight of 205t against the standard 227t. The airframer says this will enable the operator to minimise landing and navigation charges, which are based on MTOW.

Once the first three BelugaXLs are in service the A300-600ST fleet will “gradually be available for sale”, says the airframer, or potentially redeployed to enable the manufacturer to serve external customers. Airbus declines to disclose the status of any discussions it might be having on the matter.

But the company stresses that the A300-600ST could still have 10-20 years’ flying life. The original iteration of the unmistakeable Beluga, it says, is “far from being written off”.