Boeing landed new orders for 130 aircraft in July, most of which were 737 airframes, with four cancellations.

The 130 new orders included 127 737 Max aircraft – 100 of which will go to Delta Air Lines, 25 to Qatar Airways and two to American Airlines, the Arlington, Virginia-based airframer said on 9 August.

In addition, the company landed orders for three 777F freighter aircraft: one for Fedex and two for Air Canada.

Offsetting those new deals were four cancellations: one 737 Max for an unnamed lessor, and three 787-9s for BOC Aviation. 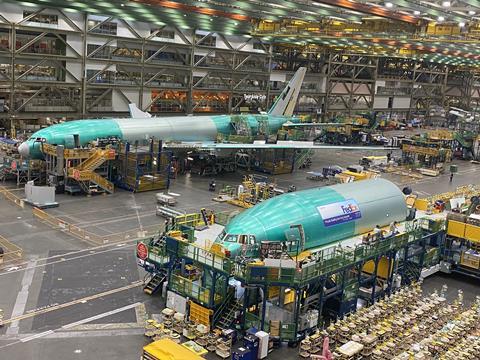 Boeing moved a net 31 aircraft from its special accounting bucket called ASC-606 back into the company’s backlog during the month. ASC-606 houses orders that Boeing suspects might not close due to factors including buyers’ financial conditions.

Boeing delivered 26 aircraft in July, about half of the number it delivered a month earlier.

The month’s orders, most of which were announced at the Farnborough air show, boosted Boeing’s backlog to 4,370 aircraft at the end of July, up from 4,239 one month earlier.

Boeing also says it has delivered 476 737 Max airframes since the type was ungrounded in late 2020.

The company did not hand over any 787s as deliveries of the type remained halted.

Deliveries of 787s have been paused for most of the last 17 months due to manufacturing quality problems, but the FAA said on 8 August that Boeing will resume deliveries “in the coming days” as the manufacturer “has made the necessary changes” to ensure that the 787 meets ”all certification standards”.

Boeing adds that it continues “to work transparently with the FAA and our customers towards resuming 787 deliveries”.