Bombardier has dropped the curtain on a cabin mock-up of a refreshed version of its Challenger 350 super-midsize business jet – a new variant called the Challenger 3500, for service entry in the second half of 2022.

The company revealed the Challenger 3500 development programme on 14 September during an event at the jet’s production facility in Montreal. 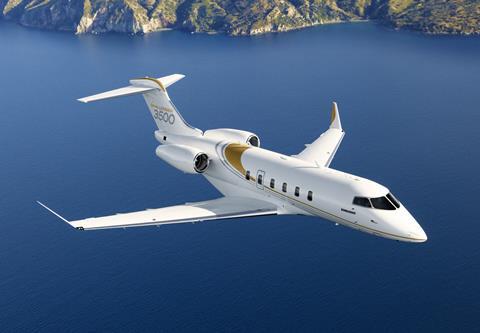 Bombardier is giving the Challenger a modern cabin – complete with features standard on larger-cabin aircraft like the manufacturer’s Globals. It is also making a few technical changes. Those include reducing the Challenger’s cabin-pressure altitude and equipping the jet with its first auto-throttle system.

“We are raising the bar on our competition with a refreshed product,” says Bombardier chief executive Eric Martel. Business jet manufacturers often promote the range and speed of their products. But, at the end of the day, a jet’s “cabin is the most important”, Martel insists.

The 3500 programme marks renewed attention by Bombardier to the super-midsize segment following several years during which it focused heavily on its Global line of large-cabin business jets. Bombardier recently divested its commercial aviation businesses and intends to end production of Learjets next year, changes that will align Bombardier solely to the medium- and large-cabin segments, which it says are the most-profitable and fastest-growing in the business jet market.

“We have been leading that market segment,” Martel says of the medium-cabin arena. “The changes we are making now will keep us leaders in that position for a long time.” 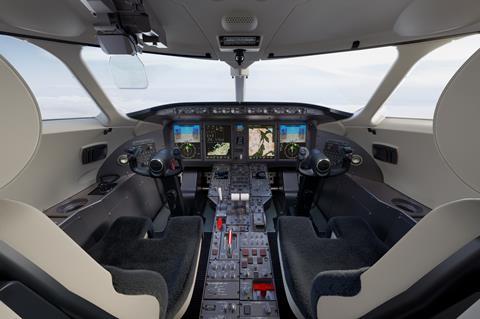 The cockpit of Bombardier’s in-development Challenger 350

The 3500’s technical changes include the auto-throttle system and a reduced cabin-altitude pressure. When cruising at 41,000ft, that pressure will be equivalent to 4,850ft – about 2,000ft less than the 350’s cabin-altitude pressure. Bombardier can make the change by reinforcing the jet’s baggage-compartment bulkhead, says manager of sales engineering Mathieu St Cyr.

But many updates are in the cabin.

Bombardier is giving the 3500 its “Nuage” leather seat, introduced on the Global 7500, which entered service in 2018.

The seat, made by a Bombardier supplier, has a tilting headrest and a “floating base” and allows for a “deep recline”. Passengers can tuck their feet under the front of the seat, as people often do when working or eating at a table. Bombardier will not simply pull the same seat from the 7500 for the 3500, but has rather “refined” the design to make it “perfectly suited” for the smaller jet. 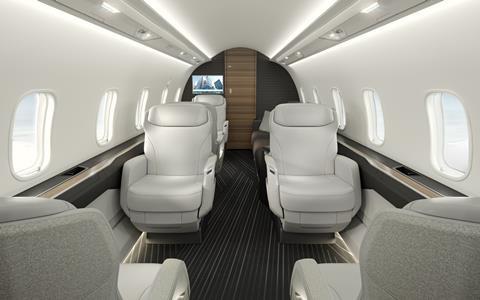 Bombardier will equip Challenger 3500s with Nuage seats, the same design found in its 7500

“It’s the first time that a seat of this calibre is in the medium category,” says Casia. The Nuage seat has more angles and is more sculpted than traditional business-jet seats, which can be “boxy”, he adds. “It’s an approach we have taken to add a feeling of spaciousness and balance.”

It will also have Ka-band connectivity, a 24in, 4K-definition monitor in the forward cabin (and an optional second aft-cabin monitor), and wireless phone chargers. The 3500’s “immersive sound system” will pump audio from speakers located behind the jet’s walls. The system will include a feature Bombardier calls “audio sweet spot”, which lets passengers optimise sound at specific locations of the cabin.

“What we are doing today is a major improvement. Technology is evolving so fast,” Martel says.

The 3500 has new cabinet latches, and side ledges composed of various materials – aluminium, leather, veneer and glass buttons. The buttons have “haptic” feedback – meaning they vibrate gently when pushed, like buttons on some smartphones (a feature made possible with small motors). The cabin has a redesigned divan, which includes a beverage storage drawer.

In the galley, the 3500 will have additional vertical space between the counter and the bottom of the top shelf, creating enough room for customers to equip their jets with high-end coffee and espresso machines. The galley will have “soft-close” drawers and a new bi-fold door. 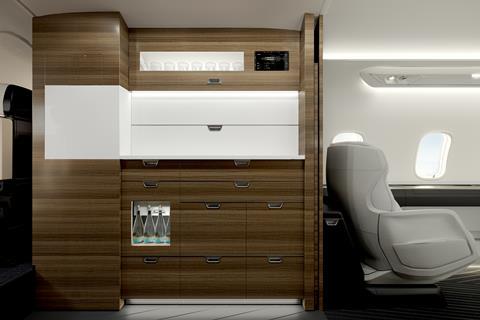 Bombardier is developing the 3500 with an eye toward sustainability, it says.

The jet’s flight-test programme will be “carbon neutral” (via use of carbon offsets and sustainable aviation fuel, also known as biofuel), and Bombardier will offer the aircraft with cabin materials that have less negative environmental impact. Those include veneer made from eucalyptus (a fast-growing tree that requires little water) and upcycled wool and polyester. Upcycled materials can include those discarded during manufacturing, such as polyester clippings.

The 3500 will also be the first super-midsize jet sold with an “Environmental Product Declaration”, a document summarising its “complete environment impact”, Bombardier says. The company introduced that document with the 7500.