De Havilland Canada has delivered the first of six Dash 8-400 aircraft to TAAG Angola Airlines, the state-owned national carrier of Angola, as it builds out its networks to that country’s smaller communities.

The south-central African carrier signed the deal, valued at $202 million at list prices, at the 2019 Paris Air Show. 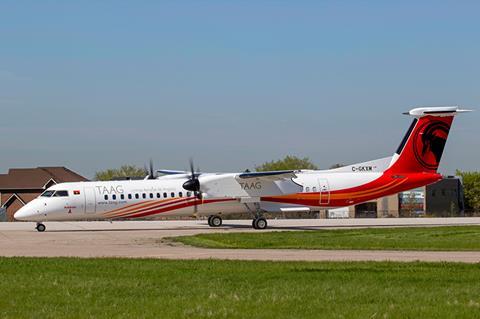 “We selected the Dash 8-400 aircraft to support our development of a stronger domestic network and also to support our regional and international networks,” said Rui Carreira, chairman and chief executive of TAAG Angola Airlines on 26 June. “The Dash 8-400 aircraft is well-known for its comfortable passenger amenities, operational versatility and outstanding economics, which will be critical for TAAG’s operations where large aircraft are not economical.”

According to Cirium fleets data, prior to the coronavirus pandemic the airline operated a fleet of Boeing 737 and 777 aircraft. In addition to destinations across Africa, the airline flew to Brazil, Portugal and Cuba.

Prior to its collapse earlier this year, Flybe was the world’s biggest operator of the turboprop, operating 54 Dash 8-400s, representing nearly 10% of the type’s global fleet. Other airlines operating the type include Austrian Airlines, Poland’s LOT, German regional carrier LGW and Air Baltic.

Longview Aviation Capital, De Havilland’s parent company, halted production in mid-March due to the coronavirus. At the time, the Canadian manufacturer, which acquired the Dash 8-400 programme from Bombardier in 2019, had an order backlog for 45 aircraft. Production re-started in May.