Embraer deliveries tick up in Q2

Brazilian airframer Embraer delivered 32 commercial and executive aircraft in the second quarter of 2022 – a significant improvement from its delivery pace in the first quarter of the year. 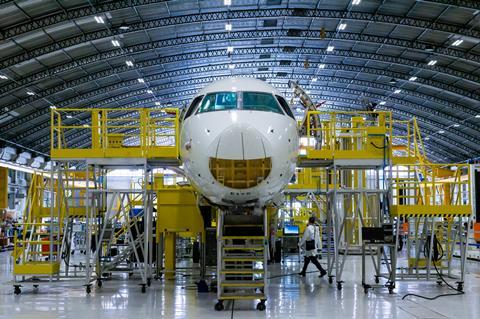 The figures show notable improvement by Embraer in the number of aircraft it has been getting into customers’ hands.

By comparison, Embraer delivered just 14 aircraft in the first quarter of the year – a period it called “atypical”. Those deliveries included six E-Jets and eight executive aircraft.

Embraer said first-quarter deliveries were minimal because it stopped production in January to accommodate work related to reintegrating its commercial aircraft business.

Embraer had split out that business ahead of a planned sale of the operation to Boeing. But Boeing backed out of the deal in April 2020.

The second-quarter deliveries were down only slightly from the same period of 2021, when Embraer delivered 34 aircraft, including 14 E-Jets and 20 executive jets.

By comparison, Embraer’s backlog included 306 commercial aircraft at the end of June 2021.