Lawmakers on 25 September scrutinised the US Federal Aviation Administration’s oversight of the aircraft safety certification process, including whether the agency misled the US Senate about the qualifications of inspectors to certify and assess pilot training for Boeing 737 Max aircraft.

FAA deputy administrator Dan Elwell testified during a hearing of the House Committee on Appropriations that the agency did not provide misleading information about inspector training in May in response to an inquiry from Senator Roger Wicker.

On 24 September, the independent Office of the Special Counsel (OSC) published results of an investigation that concluded FAA safety inspectors “were neither qualified under agency policy to certify pilots flying the 737 Max, nor to assess pilot training on procedures and maneuvers.”

“We fundamentally disagree with OSC’s conclusions,” says Elwell. “Any insinuation that the FAA misled chairman Wicker in our reply to his inquiry is not what happened”.

Wicker, who is chairman of the Senate Committee on Commerce, Science, and Transportation, in April began investigating a 2018 whistleblower complaint about inadequate training of Flight Standardization Board personnel inspecting a Gulfstream 7 jet. The OSC investigation that included FAA whistleblower testimony and internal agency communications states the findings of inadequate training “may have significant bearing on the competency of pilots certified to fly several aircraft, including the Boeing 737 Max and the Gulfstream 7”.

Elwell declines to comment beyond his testimony. An FAA spokesman says the agency stands by the letter it sent to Wicker in May.

“Everybody on the Flight Standardization Board was qualified to perform their duties related to the 737 Max,” the spokesman says.

The FAA Office of Audit and Evaluation had reviewed the 2018 whistleblower complaint Wicker referenced and found that inspectors certifying procedures for Gulfstream 7 aircraft were sometimes confused what mandatory training they needed.

That audit report was “not related to the specific work of the 737 Max Flight Standardization Board members,” Elwell testified. “That said, the original whistleblower complaint did raise legitimate issues.”

He made similar statements in May, noting that the report is an opportunity to reassess agency procedures.

The OSC report captured headlines ahead of a hearing originally scheduled to focus on aviation certification oversight, including the FAA process that allows Boeing and other companies to conduct parts of its own aircraft safety reviews.

Congressman David Price told Elwell “by definition this has been a regulatory failure” considering the two fatal 737 Max crashes during which 346 passengers and crew died.

In particular, the involvement of Boeing in the certificating process of the 737 Max has been singled out as a conflict of interest. Allowing aircraft manufacturers to certify certain elements of their products was intended by the FAA to free agency resources and allowing its inspectors to prioritize safety critical aspects of certification.

However, Elwell told committee members “there is no self-certification” because while the FAA delegates parts of safety certification to individuals or organizations to represent them, the agency makes the final decisions based on their reports.

Price asked Elwell whether the agency had adequate staff who are well-trained in the latest technologies to oversee aviation safety. Elwell responded “we are adequately staffed today,” but the agency is concerned about the future because they are competing for a “dwindling” pool of students who are pursuing careers in aerospace.

Lawmakers on other committees and relatives of people who died during two fatal crashes of Boeing 737 Max aircraft have been critical of this programme, called the Organisation Designation Authorisation, because they say it allowed Boeing to avoid longer, more thorough safety oversight for 737 Max aircraft.

Industry knowledge of aviation technologies “should be utilised in a way where there is no question of accountability,” Price tells Cirium.

A US Department of Transportation advisory committee is also preparing to analyze FAA safety oversight. The department in August appointed a 22-member Safety Oversight and Certification Advisory Committee.

While noting that such recommendations on FAA safety oversight are forthcoming, Price tells Cirium “we will have to probably delegate less and oversee more.”

Families of victims who died in the 737 Max aircraft crashes attended the hearing, holding up photos of those who died. Some wept when lawmakers reviewed the timeline of the crashes and the accident investigations.

George Omondi, who lost his sister on the Ethiopian Airlines flight, says a group of the families are scheduled to meet with FAA administrator Steve Dickson on Monday at the agency offices in Washington, D.C. Omondi and other victims are calling for “a complete recertification” of 737 Max aircraft. Dickson plans to fly on a 737 Max to personally assess software modifications created by Boeing to prevent a flight control programme created for Max aircraft from automatically trimming the jets into nosedives.

The crashes spurred discussion about whether pilots had enough training to address the emergency, so Omondi says “it’s imperative that the FAA assign adequately qualified pilots to the certification process”. 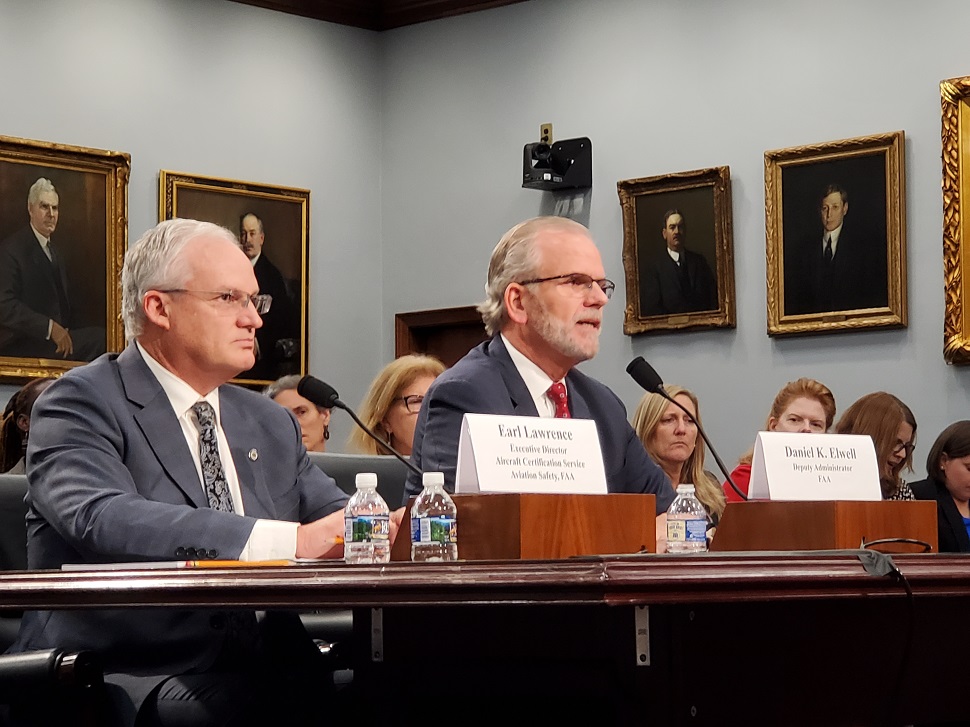