Boeing disclosed the order earlier this month but had not named the customer until 16 February. The airframer does not say when it intends to deliver the aircraft to Western Global. 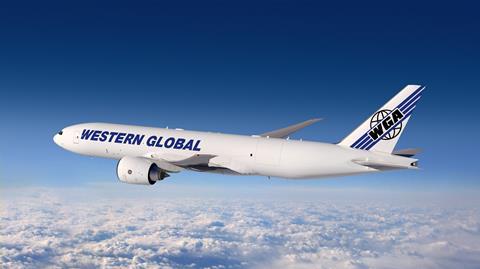 “The addition of 777 Freighters will enable Western Global to continue its growth, providing increased capability and flexibility to its operations,” says Boeing senior vice-president of commercial sales and marketing Ihssane Mounir.

Western Global has also taken an option to purchase one more 777F.

Founded in 2013, Western Global operates military charters and humanitarian and disaster-relief flights, according to its website. The airline also operates jets for clients under “ACMI” – aircraft, crew, maintenance and insurance – agreements.

Boeing has been enjoying a banner period for freighter sales. The company landed orders for 84 new-build freighters in 2021, and sold 22 freighters in January, including the two jets ordered by Western Global, four 777Fs ordered by China Airlines and 36 777Fs ordered by Qatar Airways, according to Boeing’s data. The Qatar order included two first-generation 777Fs and 34 of Boeing’s newly launched 777-8F (though 20 of those were conversions by Qatar of orders for passenger 777-8s).

Story updated on 8 March to correct Qatar’s number of 777F orders in January.