A week and a half after emerging from its hangar, Airlander 10 - the world's biggest aircraft - has made its first short flight since the cancellation three years ago of the US programme it was designed for.

The airship, developed by UK company Hybrid Air Vehicles, took off from Cardington airfield in Bedfordshire at around 19:45 local time on 17 August, landing again before dusk at 20:00.

The company says the flight marks the start of a test flight programme that is expected to last for a "number of months". 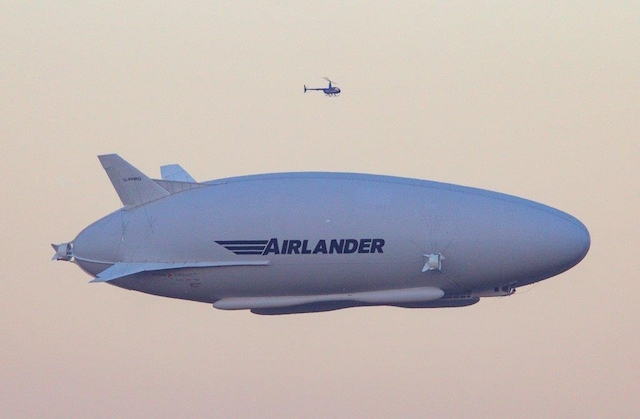 Chief test pilot David Burns, who commanded the flight with co-pilot Simon Davies, says it was a "privilege" to fly the airship for the first time. "It flew like a dream," he adds.

HAV had begun the day with a confirmatory pre-flight test at 09:00, which the company says gave the green light for the maiden sortie.

Strictly speaking, it is not the first time the aircraft has flown. It was designed for the US Army's Northrop Grumman-led Long Endurance, Multi Intelligence Vehicle contract that was cancelled as part of military budget cuts. The only prototype was returned to the developers in the UK for a token sum.

HAV says all test objectives were met during the flight, including safe launch, flight and landing, together with a "series of gentle turns at increasing speed".

The company is now calling on the UK government to fund a trial "to demonstrate the potential of this amazing aircraft to the world and secure the lucrative exports". HAV is also looking to raise equity through high net worth individuals and institutional investors to fund aspects of the flight test programme. Entrepreneur and rock celebrity Bruce Dickinson of Iron Maiden is among the current investors.