Sunday's event, which took place at the Honourable Artillery Company in central London, was the 17th running of the awards. The annual event is organised by Flight Airline Business magazine in partnership with human-capital solutions specialist Korn Ferry. 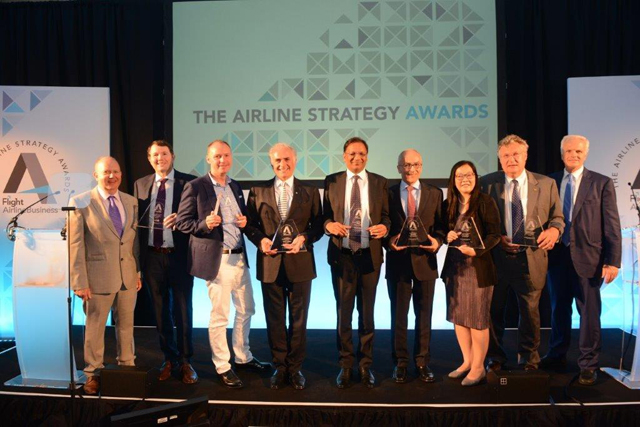 Rovinescu was recognised for his strong and unwavering leadership of Air Canada, where he devised a complex restructuring plan which has delivered huge success for the airline. Rovinescu's actions reversed the losses of a decade ago, with Air Canada having been profitable in the last six years. In 2017, the airline's net profit more than doubled to just over C$2 billion ($1.5 billion).

"Rovinescu's comprehensive, multidimensional turnaround programme brought Air Canada back from the brink and has transformed the carrier into a success story that is much admired by peers and competitors alike," said Max Kingsley-Jones, executive director content at FlightGlobal and host of The Airline Strategy Awards.

The Flight Airline Business award recognised Kelly for his impressive track record at the head of AerCap, where he masterminded the takeover of ILFC and created the world's largest leasing business.

"Kelly's shrewd approach to business has ensured AerCap has gone from strength to strength since he took the helm in 2011," said Kingsley-Jones. "He is a leasing leader that is hugely respected across the industry."

"The airline industry is enjoying a healthy existence right now in an era of sustained profitability and stability," says Kingsley-Jones. "But some airline management teams are still rising above their peers through clever strategies and innovative thinking.

"Since 2002, the Airline Strategy Awards have been established as the highest accolade in the recognition of the industry's leaders and trendsetters, identifying those who are raising the bar the way they run their businesses. This year's winners once again demonstrate how to deliver success at the highest level."