Air Canada is acquiring 26 Airbus A321XLRs, emerging as the undisclosed customer behind an order for six of the jets in the airframer’s backlog.

The airline is taking another 20 of the long-range model through leasing companies, including 15 from Air Lease and five from AerCap.

The airline also has purchase rights to take another 14 between 2027-30.

Air Canada chief executive Michael Rousseau says the acquisition of the A321XLR is an “important element” of the airline’s strategy.

“[It] will drive our core priorities of elevating the customer experience, advancing our environmental goals, network expansion and increasing our overall cost-efficiency,” he adds. 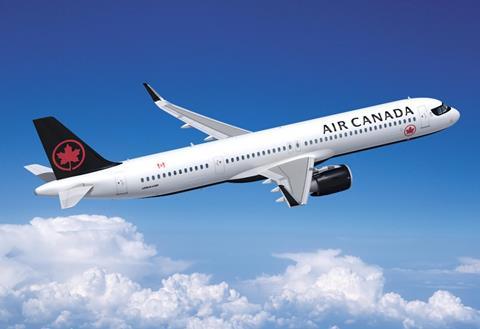 Twenty A321XLRs for the carrier will be sourced from two lessors

The A321XLR is still under development, with initial flight-test examples undergoing assembly.

Conceived as an evolution of the A321neo, the XLR will have a specially-designed central fuel tank giving the twinjet a range of up to 4,700nm. Airbus expects the variant to enter service in 2023.

Air Canada says the aircraft will be capable of serving the whole of North America and a select number of transatlantic routes.

The XLRs will be configured in a 182-seat layout including 14 lie-flat business seats and 168 seats in the economy cabin.

“This order also shows that Air Canada is emerging strongly from the pandemic and is ideally positioned to grow, compete and thrive in a reshaped global aviation industry,” says Rousseau.

Air Canada will use the jets not only for expansion but to replace older aircraft in its fleet. The airline is already a strong Airbus customer with a fleet that includes A220s, A320s and long-haul A330s.