Air Greenland is to acquire a fleet of eVTOL aircraft through lessor Avolon, to serve as shuttles in the territory.

The airline is the first European carrier to partner with Avolon’s programme for eVTOL technology.

It is committing to purchasing or leasing a fleet of Vertical Aerospace VX4 models, which will be capable of carrying four passengers – plus the pilot – over a range of some 100nm.

The number of VX4s to be acquired is yet to be determined and will be subject to assessment by a working group formed between the airline and the lessor.

This working group will seek to identify infrastructure and certification requirements for operating the aircraft in Greenland – a region with particular interest in environmental preservation. 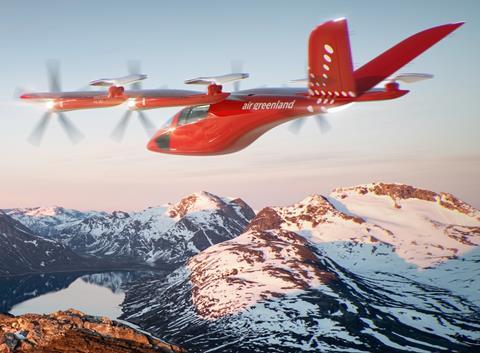 “In Greenland, we see the effects of climate change every day and, as a company, we want to be at the forefront of the climate revolution,” says Air Greenland chief executive Jacob Nitter Sorensen.

He says the airline will find “many uses” for the VX4, including transport to Ilimanaq Lodge which is normally accessed by boat.

Avolon ordered 500 of the eVTOL aircraft last year, and says it has placed up to 90% of them. Chief executive Domhnal Slattery says the agreement with Air Greenland takes zero-emissions travel to a region where climate change is having the “most pronounced impact”.

Vertical Aerospace chief Stephen Fitzpatrick adds that the pact with the carrier is a “significant first step” towards introducing sustainable air mobility to the territory.